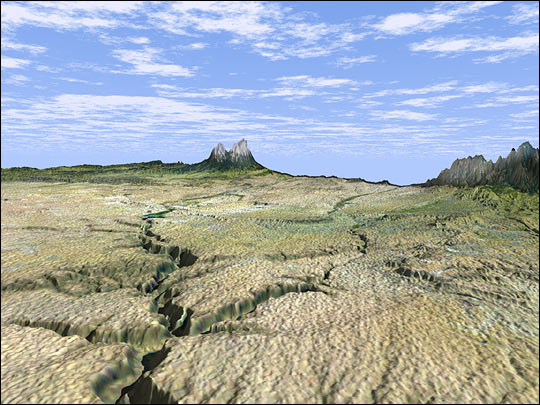 This dramatic view looks west along the Cucharas River Canyon in Colorado toward the 4,152 meter (13,623 ft) high Spanish Peaks, in the foothills of the Sangre De Cristo Mountains. The Peaks are the remnants of a 20-million-year-old volcano. Rising 2,100 meters (7,000 ft) above the plains to the east, these igneous rock formations with intrusions of eroded sedimentary rock historically served as guiding landmarks for travelers on the Mountain Branch of the Santa Fe Trail.

This three-dimensional perspective view was generated using topographic data from the Shuttle Radar Topography Mission (SRTM) and an enhanced false-color Landsat 5 satellite image. Colors are from Landsat bands 5, 4, and 2 as red, green, and blue, respectively. The height of the terrain is exaggerated by two times.

Landsat has been providing visible and infrared views of the Earth since 1972. SRTM elevation data matches the 30-meter resolution of most Landsat images and will substantially help in analyses of the large and growing Landsat image archive.