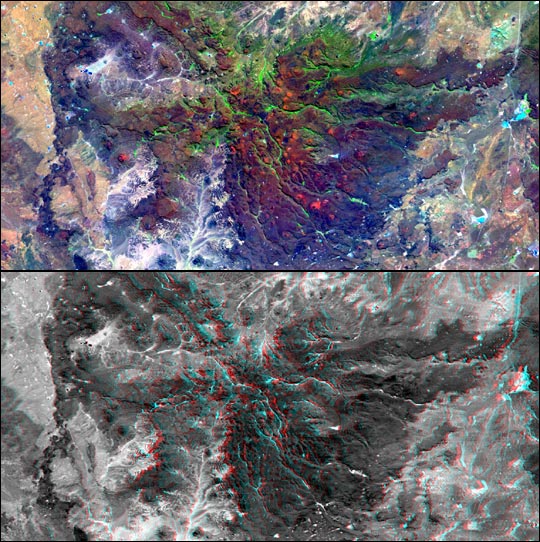 This view of northern Patagonia, at Los Menucos, Argentina shows remnants of relatively young volcanoes built upon an eroded plain of much older and contorted volcanic, granitic, and sedimentary rocks. The large, dark 'butterfly' pattern is a single volcano that has been deeply eroded. Large holes on the volcano's flanks indicate that they may have collapsed soon after eruption, as fluid molten rock drained out from under its cooled and solidified outer shell.

The color image (top) is derived from Landsat 7 data. Bands 1 (blue), 4 (near infrared), and 7 (shortwave infrared) are shown in blue, green and red, respectively.

The anaglyph (bottom) was generated by first draping a Landsat 7 Enhanced Thematic Mapper + image over a topographic map from the Shuttle Radar Topography Mission, then producing the two differing perspectives, one for each eye. When viewed through special glasses, the result is a vertically exaggerated view of the Earth's surface in its full three dimensions. Anaglyph glasses cover the left eye with a red filter and the right eye with a blue filter.

Full resolution versions of the color and anaglyph images are available from NASA’s Planetary Photojournal.