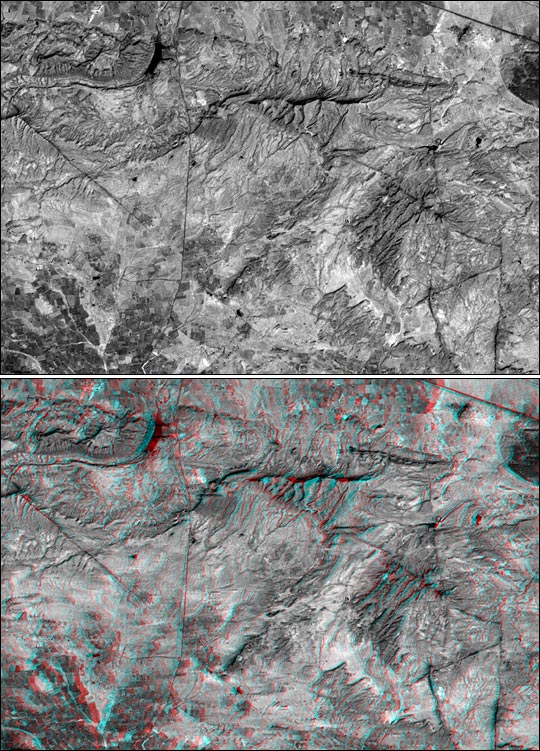 These two images are two-dimensional (top) and three-dimensional (bottom) views of the same area, southeast of Bhuj, India. Together they demonstrate how NASA's Shuttle Radar Topography Mission (SRTM) elevation models can be used to help in the interpretation of satellite imagery. The image was acquired by the Landsat 7 satellite. The top view is a standard panchromatic (visible and near infrared) satellite picture. The bottom view is the same scene projected into an anaglyph, based upon SRTM data. Anaglyphs are generated by creating two differing perspectives of a single satellite image, one perspective for each eye.

Note that there are several dark lines crossing parts of the image. Some of these lines are roads but some are geologic dikes. Dikes are sheet-like rocks formed when volcanic fluids intrude cracks in older host rocks. The intersections of these "sheets" with the topographic surface appear as linear or curvilinear traces across the terrain. The dikes traverse varied terrains and they intersect each other--much like roads. In the two-dimensional view, roads and dikes are confusingly similar in appearance. However, in three dimensions, dikes can be seen to be ridge-forming features and geographically related to other geologic features (left and lower right of image). In contrast, roads generally traverse less rugged terrain and pass through ridge gaps (upper right and left center of image). Thus the added topographic information provided by SRTM greatly helps in the image interpretation.

The stereoscopic effect of this anaglyph was created by first draping a Landsat satellite image (taken just two weeks after the earthquake) over preliminary digital elevation data from the Shuttle Radar Topography Mission (SRTM), and then generating two differing perspectives, one for each eye. When viewed through special glasses, the result is a vertically exaggerated view of the Earth's surface in its full three dimensions. Anaglyph glasses cover the left eye with a red filter and cover the right eye with a blue filter.

Landsat has been providing visible and infrared views of the Earth since 1972. SRTM elevation data matches the 30-meter (33-yard) resolution of most Landsat images and will substantially help in analyses of the large and growing Landsat image archive. The Landsat 7 Thematic Mapper image used here was provided to the SRTM project by the United States Geological Survey, Earth Resources Observation Systems (EROS) Data Center, Sioux Falls, South Dakota.