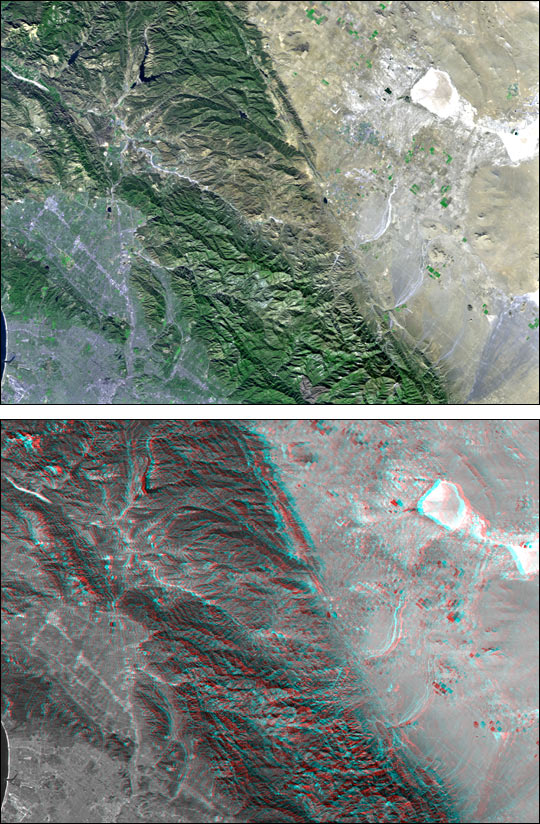 California’s topography poses challenges for road builders. Northwest of Los Angeles, deformation of Earth’s crust along the Pacific-North American crustal plate boundary has made transportation difficult. Direct connection between metropolitan Los Angeles (image lower left) and California’s Central Valley (image top center) through the rugged terrain seen on the left side of this image was long avoided in favor of longer but easier paths. However, over the last century, three generations of roads have traversed this terrain. The first was “The Ridge Route”, a two-lane road, built in 1915, which followed long winding ridge lines that included 697 curves. The second, built in 1933, was to become four-lane U.S. Highway 99. It generally followed widened canyon bottoms. The third is the current eight lane Interstate 5 freeway, built in the 1960s, which is generally notched into hillsides, but also includes a stretch of several miles where the two directions of travel are widely separated and driving is “on the left”, a rarity in the United States. Such an unusual highway configuration was necessary in order to optimize the road grades for uphill and downhill traffic in this topographically challenging setting.

This anaglyph was generated by first draping a Landsat satellite image over a preliminary topographic map from the Shuttle Radar Topography Mission (SRTM), then generating two differing perspectives, one for each eye. When viewed through special glasses, the result is a vertically exaggerated view of the Earth’s surface in its full three dimensions. Anaglyph glasses cover the left eye with a red filter and cover the right eye with a blue filter. Landsat has been providing visible and infrared views of the Earth since 1972. SRTM elevation data matches the 30 meter resolution of most Landsat images and will substantially help in analyses of the large and growing Landsat image archive.

The elevation data used in this image was acquired by the Shuttle Radar Topography Mission (SRTM) aboard the Space Shuttle Endeavour, launched on February 11, 2000. SRTM used the same radar instrument that comprised the Spaceborne Imaging Radar-C/X-Band Synthetic Aperture Radar (SIR-C/X-SAR) that flew twice on the Space Shuttle Endeavour in 1994. SRTM was designed to collect three-dimensional measurements of the Earth’s surface. To collect the 3-D data, engineers added a 60-meter-long (200-foot) mast, installed additional C-band and X-band antennas, and improved tracking and navigation devices. The mission is a cooperative project between the National Aeronautics and Space Administration (NASA), the National Imagery and Mapping Agency (NIMA) of the U.S. Department of Defense (DoD), and the German and Italian space agencies. It is managed by NASA’s Jet Propulsion Laboratory, Pasadena, CA, for NASA’s Earth Science Enterprise, Washington, DC.