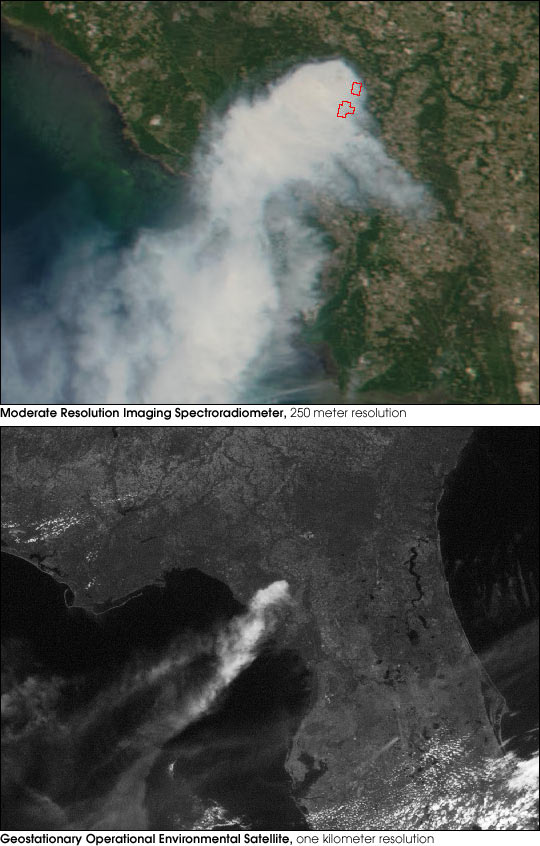 The Steinhatchee fire in northern Florida had burned more than 54,000 acres by the end of Thursday, May 24, 2001. The images above show views of the fire from two different satellite sensors: the Moderate-resolution Imaging Spectroradiometer (MODIS) and the Geostationary Operational Environmental Satellite (GOES) imager. Both instruments viewed the fire at roughly 10:45 a.m. Eastern Daylight Savings Time, May 24, 2001.

The top image shows true-color data from MODIS, with active fires outlined in red. Designed for global climate studies, MODIS circles the Earth from pole to pole, viewing the entire planet every one to two days. MODIS collects data in 36 spectral bands, ranging from blue to thermal infrared. Applications of the data include fire and land surface change monitoring, aerosol and cloud research, and ocean studies. Launched aboard NASA's Terra satellite in 1999, MODIS is expected to operate at least through 2005, with subsequent sensors on follow-on missions to continue similar global observations for at least another 10 years after that.

The GOES satellites, on the other hand, continually monitor weather over the Western Hemisphere. Current GOES satellites acquire data in five visible and infrared bands. GOES-East acquired this image while stationed above Ecuador. Geostationary satellites complete one orbit of the Earth around the equator each day, so they continually view the same area. In fact, GOES-East acquires images of Florida every 15 to 30 minutes, as shown by an animation of the fire. Notice how the smoke, at high altitudes, is moving to the west (left) while many of the clouds, at lower altitudes, move to the east.

Fire Near the Hanford Nuclear Reservation