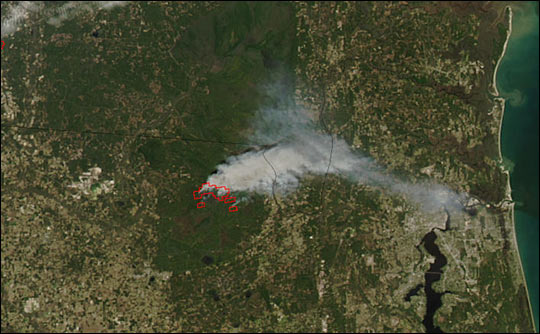 The Moderate Resolution Imaging Spectroradiometer (MODIS) captured this image of the Impassable One fire as swept through 38,000 acres of timber and swamp land in the Osceola National Forest in northeast Florida. The fire began as a prescribed burn on March 2, but slipped out of control, growing under windy conditions on March 6 and 7. On March 9, about 30 families in Taylor, Florida were forced to evacuate briefly before rains staunched the fire’s progress. As of March 10, 38,000 acres had burned, and the fire was 20 percent contained.

This MODIS image, captured by the Aqua satellite on March 9, 2004, shows a plume of smoke rising from the fire, which is marked in red. The high-resolution image posted above is at MODIS’ maximum resolution of 250 meters per pixel. The image is available in additional resolutions.