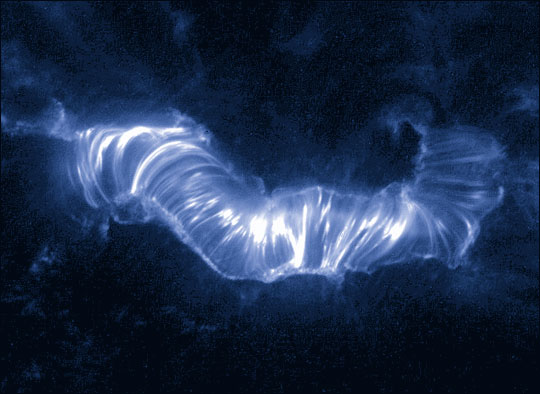 On July 14th, 2000, an active region of the sun (called AR9077) produced a massive flare. The event also blasted an enormous cloud of positive-charged particles toward planet Earth, triggering magnetic storms and dramatic auroral displays. This striking close-up of AR9077 was made by the orbiting Transition Region and Coronal Explorer (TRACE) satellite shortly after the flare erupted. Suspended in an arcade of magnetic loops, the image shows a one million degree hot solar plasma cooling down. Plasma is a gas that has been heated to a state where it contains ions and free-floating electrons. The false-color image covers an expansive 230,000 by 77,000 kilometer area on the Sun’s surface (Earth’s diameter is about 12,800 kilometers) and was recorded in extreme ultraviolet light. Collectively resembling a popular “slinky” toy, the enormous loops are actually magnetic field lines which trap the glowing, cooling plasma above the relatively dark solar surface. After the flare, AR9077’s activity decayed as it was carried farther across the Earth-facing hemisphere of the Sun by solar rotation. Active regions like AR9077 appear as groups of dark sunspots in visible light.

This flare spawned a solar storm that bombarded Earth with a shower of protons, causing scientific and communications satellites to short-circuit. Through a series of chemical reactions in our atmosphere, the protons drastically diminished the upper-most areas of the ozone layer, a protective blanket mostly in the stratosphere that blocks life-threatening ultraviolet radiation from reaching the Earth. This shower of protons, known by solar science insiders as the Bastille Day event, was the third largest of its kind in the last 30 years.