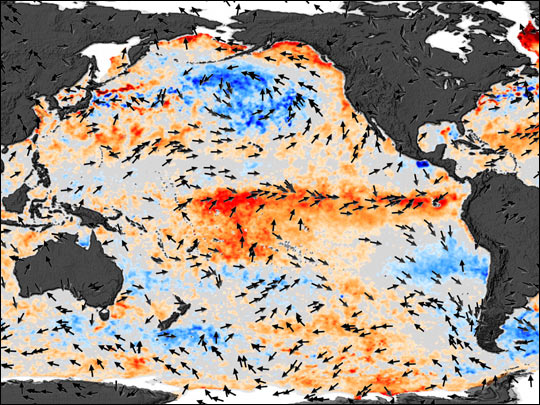 So far, it has been a very cold winter for most of the Eastern United States and, as usual, El Niño is getting most of the blame. However, new satellite images from NASA show the real culprit may be lurking over the Northern Atlantic.

The North Atlantic Oscillation (NAO) could be a major reason for this winter’s frequent Arctic blasts. Differences in the normal pressure between the high-latitude and sub-tropical North Atlantic are the signature of the NAO. The current phase of the NAO tends to produce more severe winter weather in the Northern and Eastern United States by allowing cold Arctic air to penetrate more easily from Canada into the eastern United States.

On the other side of the world, El Niño continues to exert its influence. The 2002-03 El Niño is unlike the recent El Niño of 1997-98. The image above shows that the warmest sea surface temperature (SST) anomalies (departure from normal) are concentrated in the central equatorial Pacific. Areas in red indicate warmer than normal temperatures and areas in blue show cooler than normal temperatures. Arrows indicate wind anomalies. The converging wind anomalies in the equatorial Pacific are keeping the warmest SST anomalies from the west coast of South America. During the 1997-1998 El Niño, the warmest SST anomalies were right up against the South American coast. Historically, El Niño’s effects on the United States’ weather were greatest when the warmest SST anomalies were near the coast of South America. Thus, history suggests the present El Niño’s effects on the United States’ weather should be moderate.