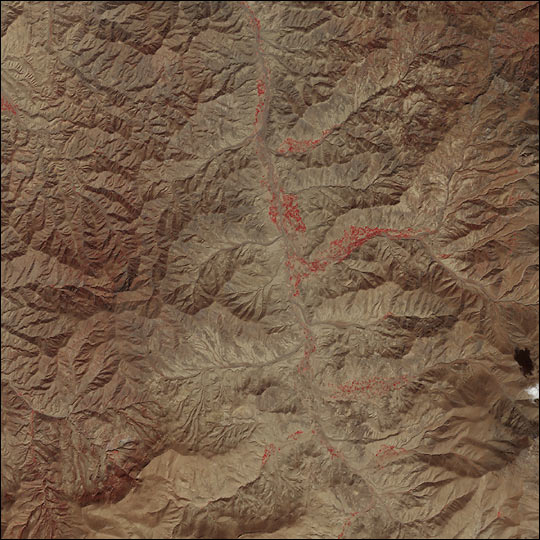 On March 25, 2002, a series of earthquakes of magnitude up to 6.1 destroyed several towns in the Hindu Kush region of Afghanistan. This mountainous area is frequently struck by earthquakes, with roughly five quakes with a magnitude of 5.0 or greater occuring each year. The Hindu Kush is near the margin of the colliding Eurasian and Indian tectonic plates. This collision causes the frequent earthquakes, and also shaped the rugged terrain and high mountains. The quakes’ relatively shallow depth of 33 km below the Earth’s surface contributed to the severe damage in local towns. A nearby earthquake on March 3, 2002, with a larger magnitude of 7.4 caused much less damage, in part because it occurred at a depth of 256 km.

This image from the Advanced Spaceborne Thermal Emission and Reflection Radiometer (ASTER), flying aboard NASA’s Terra satellite, shows the region where the quakes occurred—to the left of center in this scene. The false-color image was acquired on October 2, 2000, and is a combination of near-infrared, red, and green wavelengths.

Image by Robert simmon, based on data from NASA/GSFC/MITI/ERSDAC/JAROS, and U.S./Japan ASTER Science Team