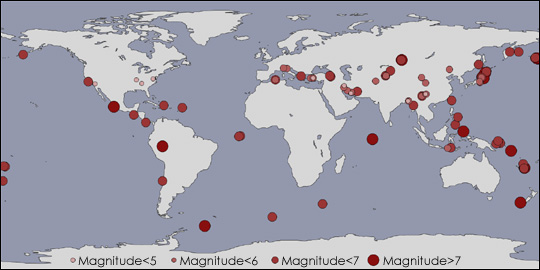 Last year, more people died in earthquakes than in any other year since 1990, according to a recent statement released by the United States Geological Survey (USGS, click to read the press release). As of January 7, 2004, the United Nations Office for Coordination of Humanitarian Affairs had confirmed 32,819 earthquake-related deaths during 2003, and that number is likely to rise as the death toll from Iran’s Bam quake increases. By comparison, 1,711 people died in 2002, and 51, 916 died in 1990.

This map shows the location of the largest or most damaging earthquakes of 2003. A few smaller quakes are shown because they had a magnitude greater than 4.5 on the Richter Scale, or they caused significant damage, or both. Not surprisingly, most of the quakes are centered along the edges of the Earth’s tectonic plates; although some do occur in the interiors of plates. (For more details, please see Putting Earthquakes in their Place.)

The Earth’s crust is a mosaic of sixteen sheets of rock, called tectonic plates. The plates float on top of the planet’s molten core, occasionally grinding against each other as they move. Their motion pushes up mountain ranges like the Alps in Europe and the Himalayas in Asia, spawns volcanoes, and generates earthquakes. Millions of earthquakes rattle the world every year, but most are too small or too remote to be detected. The USGS records about 50 earthquakes every day, or almost 25,000 quakes per year.

On average, the USGS reports, there are eighteen major earthquakes measuring between 7.0 and 7.9, and one great earthquake, 8.0 or larger, every year. Last year was no exception. A magnitude 8.3 quake shook Hokkaido, Japan, on September 25, 2003, causing injuries but no deaths. The USGS lists thirteen quakes with magnitudes between 7.0 and 7.9, and an additional eighteen 6.5-7.0 magnitude quakes for 2003.

The most devastating earthquake of the year occurred in Bam, Iran, on December 26, 2003. The preliminary death toll for that quake is estimated at 30,000 (but some expect that estimate to rise). A magnitude 6.8 quake rattled Northern Algeria on May 21, 2003, claiming 2,266 lives. In the only fatal quake in the United States, two people died in San Simeon, California, on December 22 when a 6.5-magnitude quake caused a building to collapse.

Map by Alex McClung, NASA Earth Observatory, based upon data provided by the U.S. Geological Survey