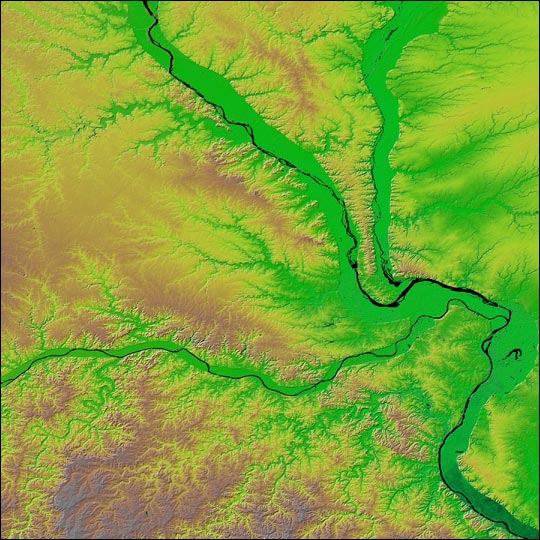 The confluence of the Mississippi, Missouri, and Illinois Rivers are shown in this view of the St. Louis area from the Shuttle Radar Topography Mission (SRTM). The Mississippi flows from the upper left of the image and first meets the Illinois, flowing southward from the top right. It then joins the Missouri, flowing from the west across the center of the picture. The rivers themselves appear black here, and one can clearly see the green-colored floodplains in which they are contained. These floodplains are at particular risk during times of flooding. The Mississippi forms the state boundary between Illinois (to the right) and Missouri (to the left), with the city of St. Louis located on the Mississippi just below the point where it meets the Missouri. This location at the hub of the major American waterways helped establish St. Louis’ reputation as the #147;Gateway to the West.”

For a very high resolution (7200 by 7200 pixel) version of this image, visit PIA03346 at the JPL Planetary Photojournal.