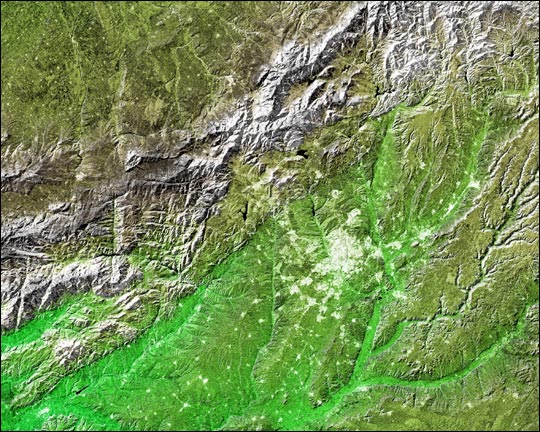 The white, mottled area in the right-center of this image from NASA’s Shuttle Radar Topography Mission (SRTM) is Madrid, the capital of Spain. Located on the Meseta Central, a vast plateau covering about 40 percent of the country, this city of 3 million is very near the exact geographic center of the Iberian Peninsula. The Meseta is rimmed by mountains and slopes gently to the west and to the series of rivers that form the boundary with Portugal. The plateau is mostly covered with dry grasslands, olive groves and forested hills.

Madrid is situated in the middle of the Meseta, at an elevation of 646 meters (2,119 feet). To the northwest of Madrid, and visible in the upper left of the image, is the Sistema Central mountain chain that forms the “dorsal spine” of the Meseta and divides it into northern and southern subregions. Rising to about 2,500 meters (8,200 feet), these mountains display some glacial features and are snow-capped for most of the year. Offering almost year-round winter sports, the mountains are also important to the climate of Madrid.

Three visualization methods were combined to produce this image: shading and color coding of topographic height and radar image intensity. The shade image was derived by computing topographic slope in the northwest-southeast direction. North-facing slopes appear bright and south-facing slopes appear dark. Color coding is directly related to topographic height, with green at the lower elevations, rising through yellow and brown to white at the highest elevations. The shade image was combined with the radar intensity image in the flat areas.