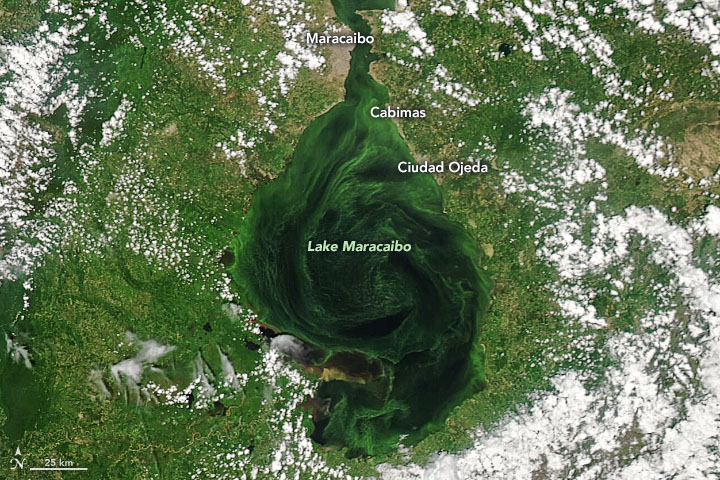 It was once a source of great abundance—particularly fossil fuels and fish—for the people of Venezuela. Now Lake Maracaibo is mostly abundant with pollution from leaking oil and excess nutrients.

Spanning 13,000 square kilometers (5,000 square miles) in northwestern Venezuela, Lake Maracaibo is one of South America’s largest lakes and one of the oldest in the world. Though it was filled with freshwater thousands of year ago, Maracaibo is now an estuarine lake connected to the Gulf of Venezuela and the Caribbean Sea by a narrow strait. That strait was significantly expanded in the 1930–50s by dredging for ship traffic. Now the north end of the lake is brackish, while the south end is mostly fresh due to abundant flows from nearby rivers.

In satellite images acquired in September 2021, Lake Maracaibo was swirling with shades of green, tan, and gray that traced the flow of currents and eddies. The sources of those colors were algae, river sediment outflows, and crude oil leaks. The image at the top of this page was acquired by the Moderate Resolution Imaging Spectroradiometer (MODIS) on NASA’s Aqua satellite on September 25. The Operational Land Imager (OLI) on Landsat 8 observed the scene below on September 10. 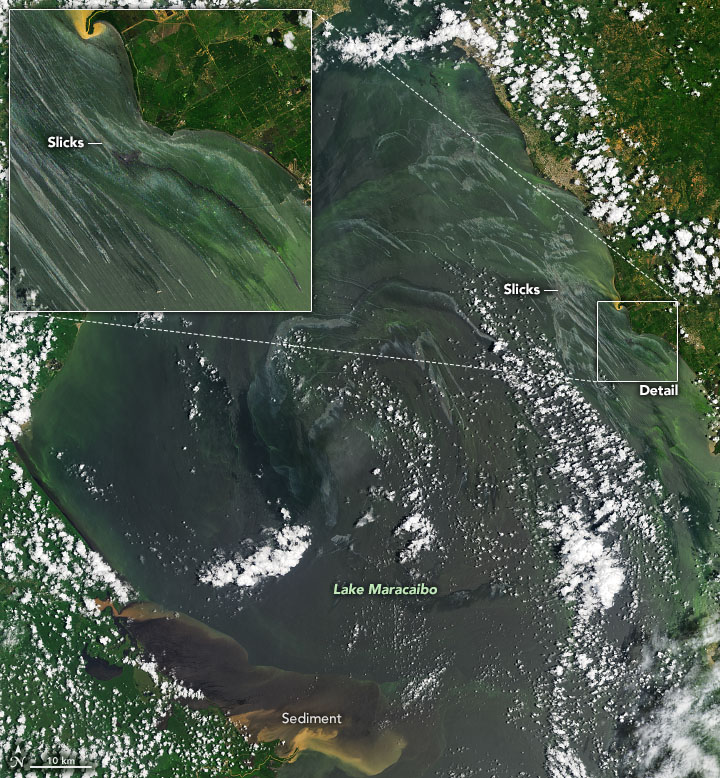 One of the largest known oil and gas reserves in the world sits beneath Lake Maracaibo. Thousands of wells have been drilled into the lake since World War I, first by foreign companies and then by Venezuela’s state-run oil company. About two-thirds of the oil produced by the country comes from this region.

But the fuel that once made Maracaibo prosperous is now endangering wildlife, water quality, and human health. According to many news and scientific reports, the region’s oil-extraction and delivery infrastructure is in serious disrepair. Slicks have been a regular occurrence on the lake for many years, and crude oil often washes up on the shores. “The oil spills are multiple and continuous, and you can easily spot the sources,” noted Eduardo Klein-Salas, a remote sensing scientist at Simón Bolívar University. “Maracaibo Lake has more than 10,000 oil-related installations and a network of thousands of kilometers of underwater pipelines, most of them 50 years old.”

According to reports from news agencies, environmental groups, and human rights advocates, as many as 40,000 to 50,000 oil leaks and spills occurred between 2010 and 2016 across Venezuela, including Lake Maracaibo. Thousands of oil derricks and thousands of miles of pipelines are decaying or leaking due to a reported lack of capital to repair them. Local fishermen often find their nets and their catch soaked in crude.

“The oil is spilling from many aging, submerged pipelines that are not maintained, mostly not even mapped,” said Frank Muller-Karger, a University of South Florida marine scientist who has studied the lake with MODIS data. “Other oil slicks come from leaking above-surface storage tanks and vessels, and still others from drilling platforms.” 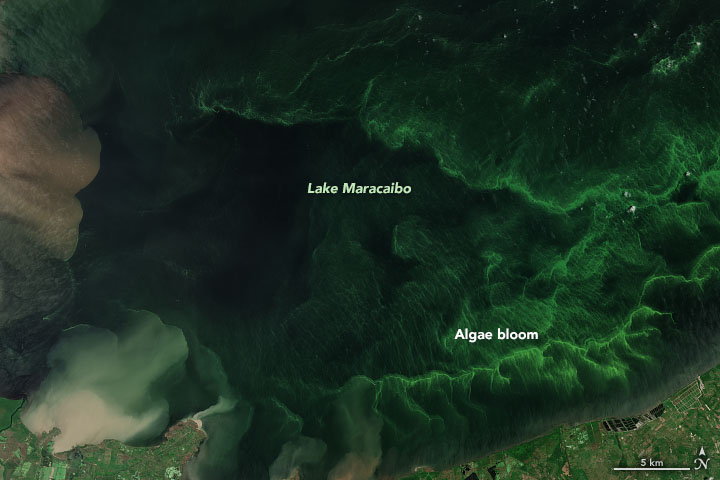 The widespread greenery in the water is another sign of distress. The natural-color image above from September 2, 2021, shows a closeup of algae blooms in the southern end of Lake Maracaibo. The image was acquired by the MultiSpectral Imager on the European Space Agency’s Sentinel-2.

In the early 2000s, Lake Maracaibo was the scene of several vast blooms of Lemna obscura, more commonly called duckweed. (It is locally referred to as lenteja de agua, or water lentil.) Though duckweed is not toxic, it can clog water intakes and ship engines; it can also crowd out or suffocate other marine species. Under the right conditions, the marine plants double in size in just a day. In 2004, extreme rains freshened and mixed Lake Maracaibo, and excessive nutrients from the lake floor and from nearby farmland and sewage systems triggered a massive bloom that lasted eight months.

The lake is still overloaded with nutrients, and duckweed still blooms occasionally in some smaller lagoons. But much of the green in the lake now comes from abundant green algae like Scenedesmus and Chlorella. “The green blooms you see are phytoplankton and cyanobacteria blooms, locally called verdín,” said Klein-Salas. “They are a permanent feature of the lake, dependent on the seasonal cycle of mixing of the already highly eutrophic environment.”

“The NASA satellite data on both problems [duckweed and oil] were amply circulated in Venezuela a decade ago and still are,” said Muller-Karger. “The ecological problems with oil spills are cumulative and affect many local fishermen, not just in Lake Maracaibo but in many places along the Venezuelan coast from Lake Maracaibo to the Gulf of Paria. Yet there is no effort by the government to change things; rather, the oil spills have gotten worse with time.”

Venezuela’s Lake Maracaibo is choking with oil slicks and algae.