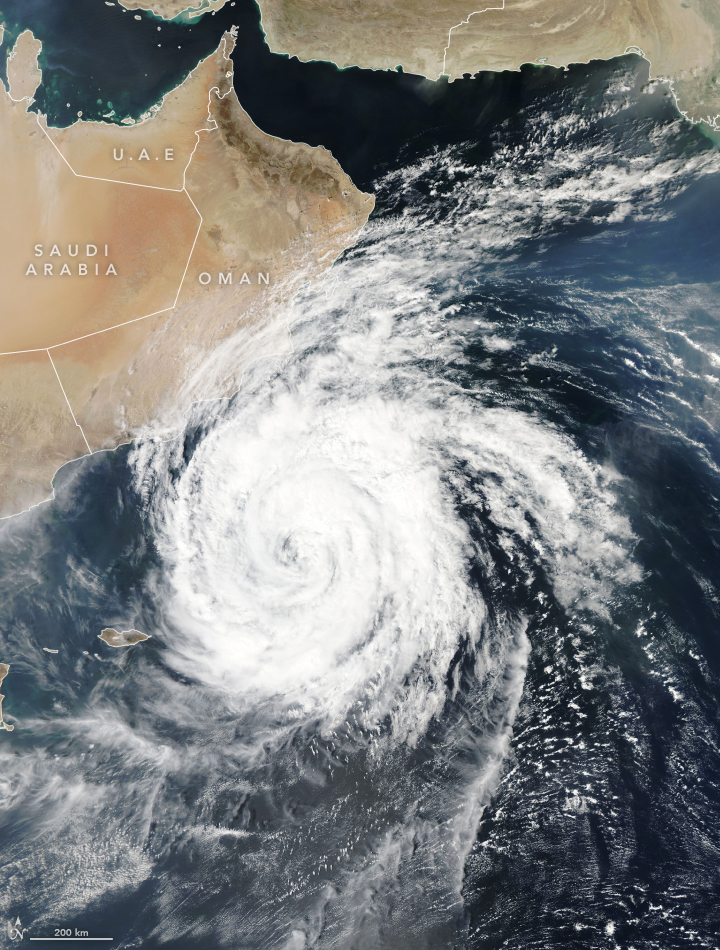 While much of the Western Hemisphere has been focused on the destructive Hurricane Michael, two storms have also roiled the northern Indian Ocean.

The Moderate Resolution Imaging Spectroradiometer (MODIS) on NASA’s Aqua satellite acquired this natural-color image of Cyclone Luban in the early afternoon of October 11, 2018. The storm is the third to develop in the Arabian Sea in 2018. The region is a major crossroads for ships passing from the Atlantic and Mediterranean to the Indian Ocean by way of the Suez Canal and Strait of Hormuz.

According to the U.S. Joint Typhoon Warning Center (JTWC), Luban had sustained winds of 65 knots (75 miles/120 kilometers per hour) around midday on October 11. Maximum wave heights were estimated at 26 feet (8 meters). The storm was centered about 250 miles (400 kilometers) southeast of Salah, Oman, and moving westward at just 2 knots (2.3 miles per hour).

Oman’s Public Authority for Civil Aviation reported that the outer bands of the storm had already brought rainfall and increased winds near Dhofar and Al Wusta. Forecasters predict that Luban will make landfall in Yemen as a tropical storm on October 14. Forecasters warned of dangerous landslides and flash flooding when the storm hits the normally bone-dry, sandy lands.

Twelve cyclones have formed in this region since 2010, but very few reach the Arabian Peninsula at cyclone strength; they usually weaken to tropical storms as dry desert air and wind shear sap their energy. 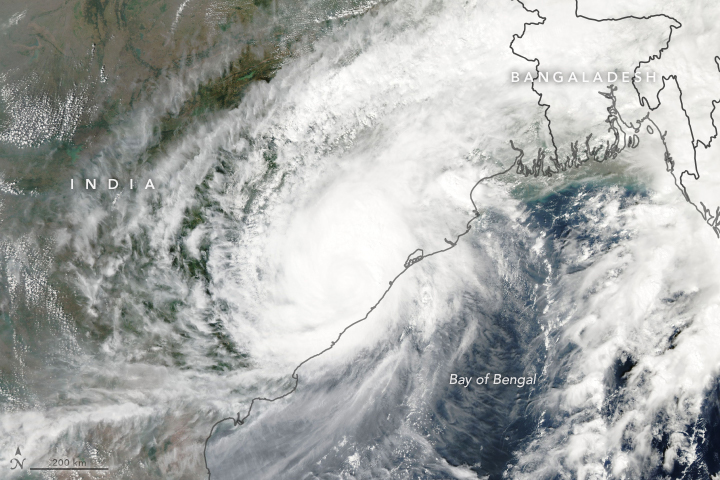 Across the Indian Ocean to the east, Cyclone Titli brought drenching rain and fierce wind to India. The MODIS instrument on Aqua acquired this natural-color image of the storm on October 11, 2018, shortly after landfall near Gopalpur. Wind speeds were reported to be roughly 150 kilometers (90 miles) per hour. Hundreds of homes have been destroyed, and nearly a half-million people lost electricity.

In a 2011 paper, atmospheric scientists argued that increasing air pollution—particularly an increase in aerosols—over the northern Indian Ocean has likely reduced vertical wind shear, a phenomenon that could alter monsoon weather patterns and allow more cyclones to form.