Bounty of the Pacific Northwest 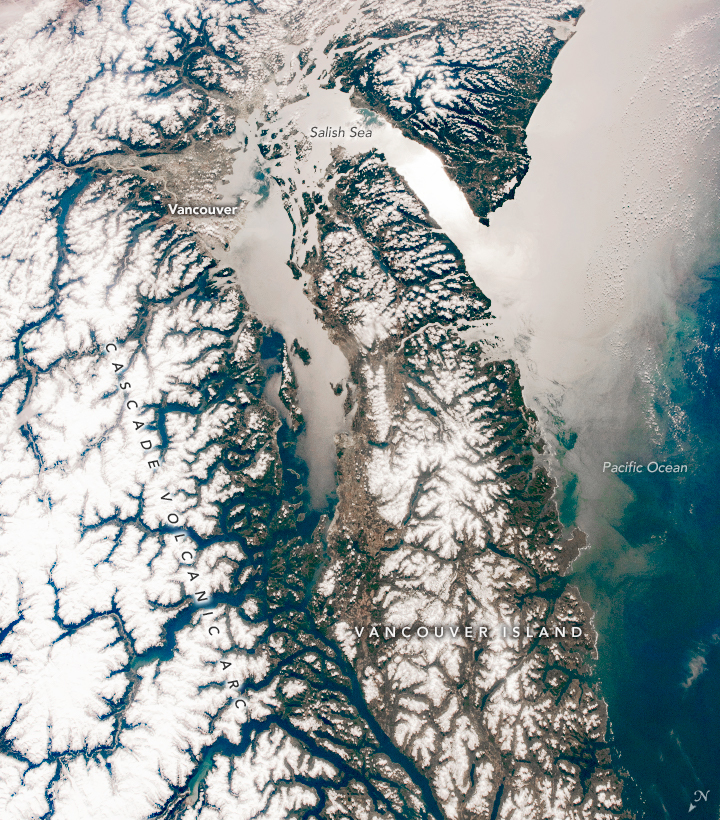 An astronaut aboard the International Space Station shot this springtime photograph of the snow-covered regions of British Columbia (Canada) and the U.S. state of Washington. Both cities of Vancouver, as well as the island, were named for Captain George Vancouver, a British Royal Navy officer best known for his exploration of the northwestern Pacific Coast in the late 1700s. (Note: Vancouver, Washington, is just beyond the top edge of the image.)

After the expeditions by Vancouver and later by Lewis and Clark in the early 1800s, American and European pioneers flocked to the region. This area of the Pacific Northwest, specifically near the Salish Sea and the Columbia River, became popular for fur trading between Native people and European and American explorers in the early 1800s.

By the late 1800s, newcomers quickly realized the potential of another natural resource, which led to a flourishing commercial salmon industry in the 1890s. The region is still a major exporter of wild salmon and now farmed salmon, too; British Columbia’s largest agrifood export is actually Atlantic salmon. The area is also popular with tourists who visit the region’s lakes and rivers to fish for trout, sturgeon, and salmon.

Prominent in this photo is the snow-capped Cascade Volcanic Arc, a range of thirteen major volcanic centers that runs from northern California to coastal British Columbia. The volcanoes are fueled by subduction along the edges of two tectonic plates. Many of them became active about 36 million years ago, with the most recent activity being ash and steam eruptions and summit dome growth at Mount St. Helens that ended in 2008.

Astronaut photograph ISS055-E-31116 was acquired on April 22, 2018, with a Nikon D5 digital camera using a 25 millimeter lens and is provided by the ISS Crew Earth Observations Facility and the Earth Science and Remote Sensing Unit, Johnson Space Center. The image was taken by a member of the Expedition 55 crew. The image has been cropped and enhanced to improve contrast, and lens artifacts have been removed. The International Space Station Program supports the laboratory as part of the ISS National Lab to help astronauts take pictures of Earth that will be of the greatest value to scientists and the public, and to make those images freely available on the Internet. Additional images taken by astronauts and cosmonauts can be viewed at the NASA/JSC Gateway to Astronaut Photography of Earth. Caption by Sarah Deitrick, Jacobs, JETS Contract at NASA-JSC.

The area around the two Vancouvers is rich in natural beauty and resources.