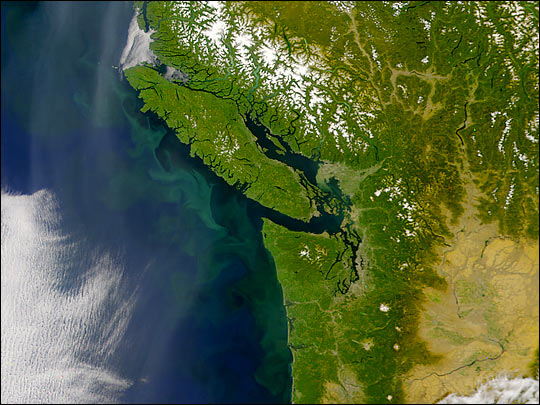 This image shows a rare clear view over the Pacific Northwest, including portions of Washington State, Oregon, and the Canadian province of British Columbia. The image was acquired by the Sea-viewing Wide Field-of-view Sensor (SeaWiFS) on August 9, 2001. Vancouver Island is located in the upper center of the image. From north to south (top to bottom) the cities of Vancouver (to the right of and across the Strait of Georgia from Vancouver Island), Seattle (Along Puget Sound) and Portland (bottom center) appear light green.

The forests along the coast (home of the Spotted Owl) and on the mountains of British Columbia are colored dark green. The Coast Mountains are capped by glaciers, colored white. The Cascade Range blocks moisture coming in from the Pacific Ocean, creating the arid conditions of the Columbia Plateau to the east. Mt. Rainier, Mt. Adams, and Mt. Hood are shown by three white patches of snowcover running north/south. Mt. St. Helens is the slightly larger cluster of grey pixels just to the left of Mt. Adams.

Offshore, phytoplankton blooms (blue/green) are slightly obscured by a greyish haze, possibly from forest fires in Siberia. In the lower left corner are the low-lying clouds of the marine layer, which usually lies closer to the coast.

Phytoplankton off the Coast of Washington State