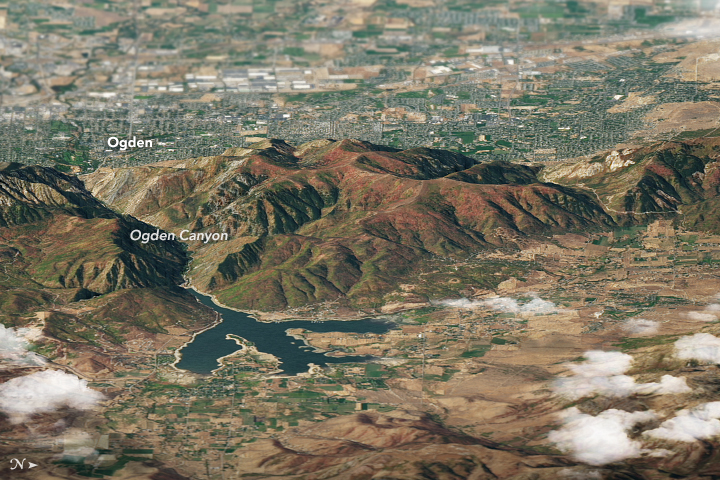 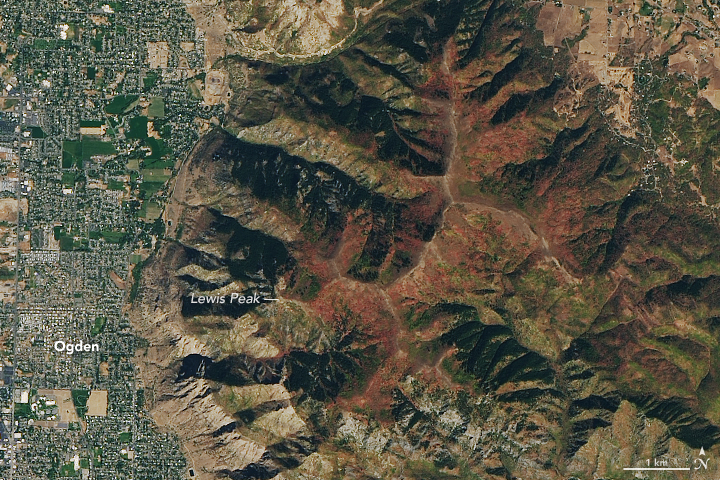 The eastern United States is well known for its widespread show of vibrant foliage each autumn. But western states grow more than just evergreen pines and palms; they also display some spectacular fall color. These images show deciduous trees in northern Utah painting the mountains in shades of red, orange, yellow, and purple.

The Operational Land Imager (OLI) on Landsat 8 acquired the images on September 27, 2018, as daylight hours shortened and temperatures cooled. The top image, draped over elevation data from the Shuttle Radar Topography Mission (SRTM), shows Ogden Valley in the foreground. The valley is nestled amid part of the Wasatch Range and is accessible by three scenic roads. The Ogden River Scenic Byway, for example, meanders for about 16 kilometers (10 miles) through the Ogden Canyon, connecting the city of North Ogden with Ogden Valley.

The second image is a nadir (straight-down) view showing Ogden city at the base of the colorful mountain slopes. Hikers can reach the 2,448-meter (8,031-foot) summit of Lewis Peak via a network of trails in the Uinta-Wasatch-Cache National Forest. It’s not the tallest mountain in the vicinity, but it offers views of the nearby Willard and Ben Lomond peaks. Along the route, you can find fir trees mingling with wildflowers in July and August and with colorful deciduous trees by September. The U.S. Forest Service noted about the Lewis Peak trail: “There may be no better place to view the autumn colors than along this route.”

Colorful leaves adorn a variety of tree species in Utah’s forests, including canyon maples, quaking aspens, scrub oaks, and Douglas hawthorn. The timing of the color change in Utah this year was roughly on schedule, according to news reports. Other parts of the country, from Maine to the mid-Atlantic, saw color appear a few weeks late due daily low temperatures that have been warmer than usual.

The cooler temperatures and longer nights that arrive with fall tell trees to stop producing chlorophyll. In the absence of this green pigment, the yellow, orange, and red pigments left behind become visible. Weather factors—such as too much or too little water, and the timing of that water—also affect the intensity and timing of color. 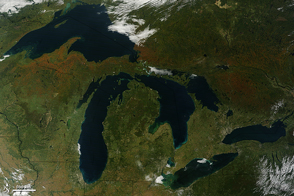