A Satellite Eye on Mount Ruapehu 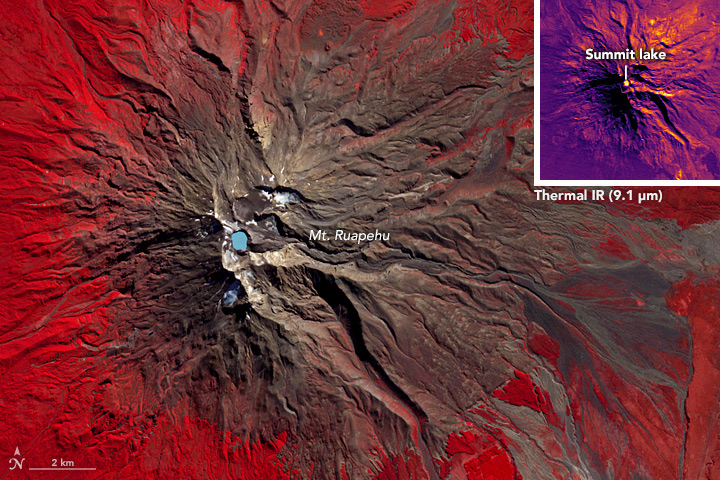 On a busy day in winter, you can find thousands of people skiing the slopes of Mount Ruapehu, a 2,797-meter (9,177-foot) peak on New Zealand’s North Island. Skiers and snowboarders on Ruapehu have the usual hazards to mind: moguls, black diamond trails, and jumps. But they have a less-common hazard to contend with as well—the threat that a river of liquefied ash and mud (a lahar) will come streaming down the mountain behind them.

Mount Ruapehu, one of the most active volcanoes in New Zealand, has erupted 66 times since 9,850 BCE, according to the Global Volcanism Program. Throughout recorded history, major eruptions have occured about 50 years apart, most recently in 1895, 1945, and 1995. Minor eruptions occur every few years.

Recent eruptions have come from a vent at the bottom of a crater lake on Ruapehu’s summit. When eruptions occur, they can send surges of gases and ash rushing upward that eject large amounts of water from the lake and send it spilling down the steep slopes of the mountain. In 1953, a natural dam on the edge of the crater lake gave way, sending a lahar rushing into the Whangaehu River. That event destroyed a railroad bridge, sent an oncoming train crashing into the river, and took the lives of 151 people.

The threat of lahars, combined with the large numbers of people regularly using the mountain, has prompted geologists to monitor Ruapehu for signs of unrest. Scientists with GNS Science lead the effort, maintaining a network of seismic sensors and microphones, monitoring the lake with live video cameras, and conducting frequent tests of the lake water to look for chemical signs of impending activity.

Satellites offer another perspective. For instance, the Advanced Spaceborne Thermal Emission and Reflection Radiometer (ASTER) on NASA’s Terra satellite can detect thermal infrared wavelengths and thus be used to observe volcanoes on the verge of erupting. On April 20, 2016, ASTER captured this image of a restless Mount Ruapehu. The false-color image depicts vegetation as red, the crater lake as light blue, and rock as brown. The smaller inset image, made with observations of thermal infrared energy, shows warmer areas in yellow and cooler temperatures in purple.

In April 2016, the temperature of Ruapehu’s crater lake increased from 20 to 45 degrees Celsius (68 to 113 degrees Fahrenheit). As of June 3, 2016, local authorities listed the volcanic alert at level 2, indicating moderate to heightened volcanic unrest. To learn more abut how ASTER can be used to monitor volcanoes, watch the video below.

Scientists use sensors the ground and in space to keep a watchful eye on an active volcano in New Zealand that is popular among skiers. 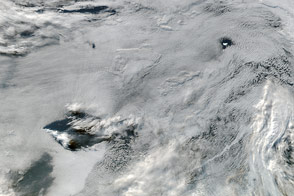 These images show Mount Ruapehu on the North Island of New Zealand and its summit lake, observed by the Advanced Spaceborne Thermal Emission and Reflection Radiometer (ASTER) on NASA’s Terra satellite. The first image is a simulated true-color image taken on January 12, 2001. The series of thermal infrared images show maps of the lake temperature over time, showing times of enhanced volcanism.