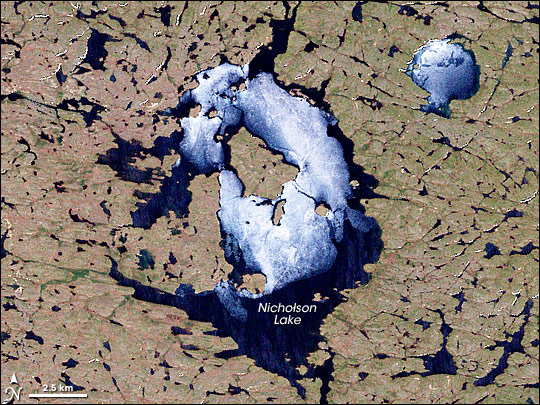 Some 400 million years ago, a meteor struck Earth in what is now Canada’s Northwest Territories. Plate tectonics have rearranged Earth’s continents considerably since then, and the 12.5-kilometer- (7.8-mile-) wide crater is now Nicholson Lake, one of many small lakes that dot the sub-arctic, glacier-scoured landscape.

NASA’s Landsat 7 satellite captured this image of Nicholson Lake on July 6, 2000. At more than 60 degrees north, the lake sports a partial, silver-blue icy coating even in the Northern Hemisphere summer, as does the smaller water body to the east. Ice-free parts of the lake appear navy blue. The pastel hues of the land surrounding the lake suggest minimal vegetation, but this lake is not surrounded by bare ground. The larger ecosystem of the region is boreal forest—coniferous forest mixed with bogs and tundra. Trees in such areas can be stunted, but some trees do survive, evidenced by isolated patches of dark green. Ponds and lakes linked by streams permeate the region, and many of the waterways reach Nicholson Lake.

A 2002 review paper examined the evolution of ecosystems created by impact events. The authors concluded that, given enough time, the small-scale ecosystem created by a meteor impact can come to resemble the surrounding ecosystem. Nicholson Lake provides a good example. While many crater lakes are isolated from other water bodies by steep crater rims, Nicholson Lake has been infiltrated numerous times by nearby waterways, enabling the movement of plant and animal species between them.

Some 400 million years ago, a meteor struck Earth in what is now Canada’s Northwest Territories. The 12.5-kilometer- (7.8-mile-) wide crater is now Nicholson Lake, one of many small lakes that dot the sub-arctic, glacier-scoured landscape.