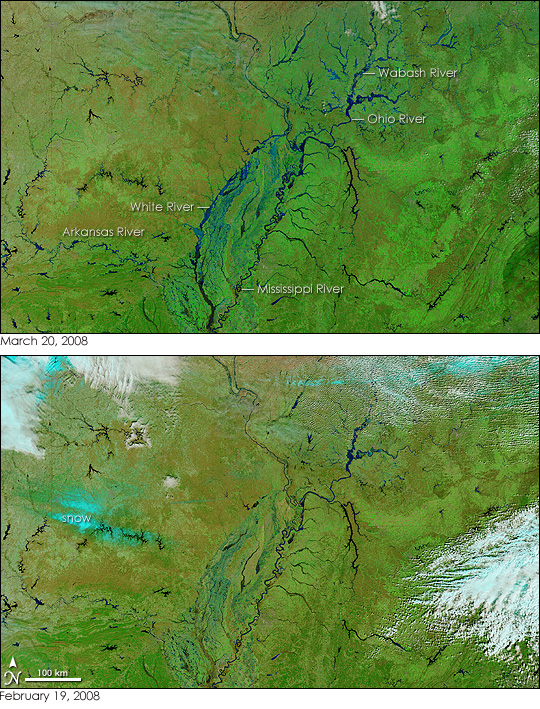 Widespread flooding swept across much of the central United States in the wake of an intense spring storm starting on March 18, 2008. As water flowed through the vast network of rivers and streams that make up the Mississippi River basin, the flooding spread. When the clouds cleared on March 20, the Moderate Resolution Imaging Spectroradiometer (MODIS) on NASA’s Terra satellite captured this view of swollen rivers across the Mississippi basin. The lower image, captured on February 19, 2008, is provided for context.

On March 20, a flush of deep blue accentuates nearly every river in the scene. The images were made with both infrared and visible light to make water—usually a muddy tan if viewed from above with human eyes—stand out distinctly from the surrounding landscape. Not only are major rivers like the Mississippi, Arkansas, Ohio, and Wabash flooded, but significant flooding is evident in their tributaries as well. The most visible floods in this image are on the White River and its tributaries.

The image also reveals how widespread the floods are. The image above stretches from Arkansas to Ohio, and additional flooding is visible in the large image, which covers a much broader area.

Around the rivers, the plant-covered land is green. The shades of green vary with the type of land cover (crops, forest, etc.), latitude, and elevation. Clouds are white and light blue, and snow is turquoise.

Daily images of the United States are available from the MODIS Rapid Response System, accessible from a clickable map.

Widespread flooding swept across the midwestern United States in the wake of a powerful early spring storm.