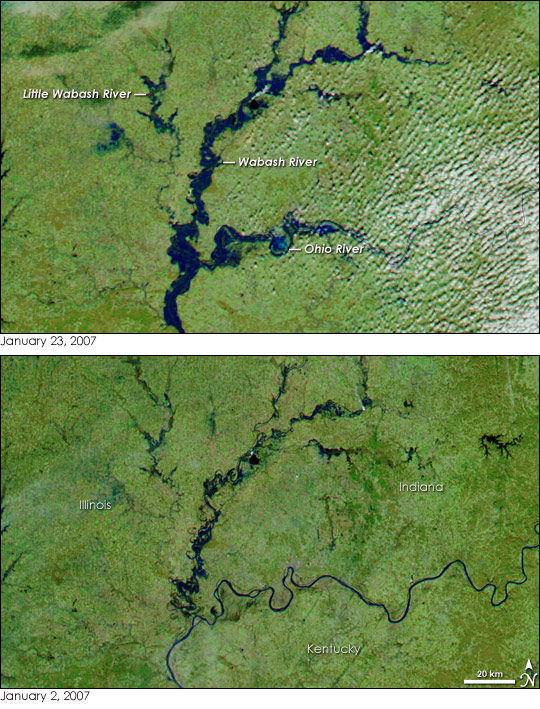 At the point where Illinois, Kentucky, and Indiana meet, the Wabash River flows into the Ohio River, which in turn will eventually feed the Mississippi River. The two rivers are susceptible to flooding in the winter and spring, and by the end of January 2007, the confluence of the Wabash and the Ohio bulged with water. The floods came after a series of winter storms pummeled the Midwest United States in mid-January. The effect of the storms on the rivers is clear from this pair of false-color images, taken by the Moderate Resolution Imaging Spectroradiometer (MODIS) on NASA’s Aqua satellite.

The images are made with a combination and infrared and visible light, which makes water much more visible than it would be in a photo-like image. In this combination of wavelengths, water is dark blue or black, plant-covered land is green, sparsely vegetated or bare ground is tan-pink, and burned ground is red-brown. Icy clouds are light blue, while water clouds are white. The top image was take on January 23, 2007, shortly after the storm clouds cleared. Compared to the lower image, which was taken on January 2, the Wabash, Ohio, and Little Wabash Rivers are all swollen. By January 25, the floods appeared to be receding. Daily images of the Midwest are available from the MODIS Rapid Response System.

A strong winter storm in late January 2007 unleashed heavy rain across the United States from Texas to Indiana, causing rivers across the region to burst their banks.

Floods in the Ohio River Valley