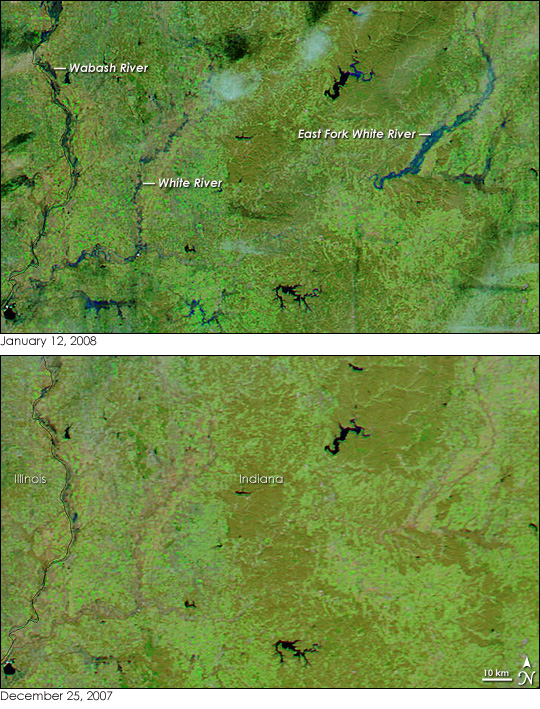 Unusual winter thunderstorms and warm temperatures led to flooding throughout Indiana, Illinois, Michigan, and Ohio in mid-January 2008, said the Dartmouth Flood Observatory. The thunderstorms brought heavy rain, and the warm temperatures melted snow, causing floods usually seen in the spring. The Moderate Resolution Imaging Spectroradiometer (MODIS) on NASA’s Aqua satellite captured the top image of floods in Indiana on January 12, 2008. The lower image was taken on December 25, 2007. The images illustrate the extent of flooding in the White and Wabash River basins. Most notably flooded is the East Fork of the White River in the upper right corner of the image. Not even visible on December 25, the river was at least a kilometer wide in places on January 12. The White and Wabash Rivers were also swollen. The floods damaged hundreds of homes throughout the Midwest, said the Dartmouth Flood Observatory.

In these images, the flood-enlarged rivers are dark blue. Water is typically black in this type of image, which is made with both visible and infrared light, but mud scatters light, giving the water the blue tint seen here. The plant-covered land is green, while bare earth or sparsely vegetated areas are tan-pink. Natural vegetation is darker and browner in tone than crops. Fertilized agricultural fields color the land with tiny dots of almost fluorescent green. Clouds are pale blue and white. The MODIS Rapid Response System provides twice daily images of the United States in both infrared, as shown here, and photo-like true color.