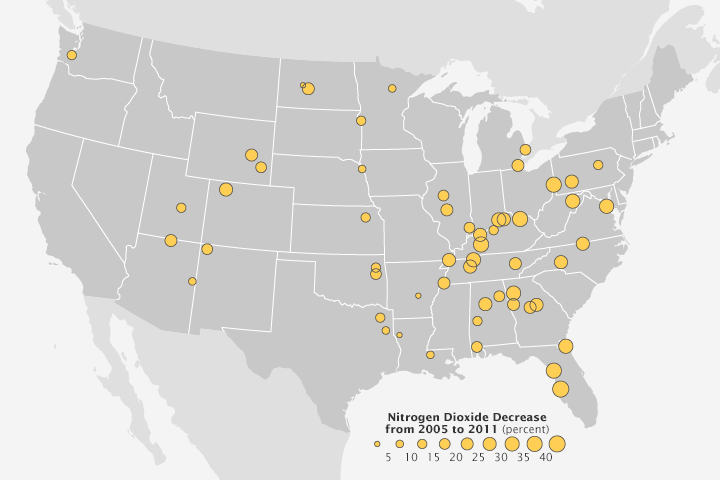 In 1998, the U.S. Environmental Protection Agency (EPA) called on 22 eastern states to develop plans to significantly reduce emissions of nitrogen oxides (NOx), a group of highly reactive gases released by combustion engines, electric power plants, and a range of industrial activities. NOx is a precursor to ozone, while nitrogen dioxide has some harmful health effects. In 2005, the EPA issued the Clean Air Interstate Rule, a regulation that encouraged states to use a cap-and-trade system to further reduce emissions of NOx.

About a decade later, the effects of these federal and state efforts have left the air far cleaner than it was before. Total NOx emissions have fallen by 47 percent in the United States since the late 1990s. Emissions from electric power generation and highway vehicles, the two largest sources, have decreased by 68 percent and 43 percent respectively, according to EPA statistics. The declines are even large enough to be seen from space.

In 2013, a team of scientists published an analysis of data from the Ozone Monitoring Instrument (OMI) on NASA’s Aura satellite. They found major declines in NOx between 2005–2011 in the skies over power plants in the central and eastern United States. The map above illustrates larger decreases with larger circles. The observations came just as many power plants installed emissions control devices such as low NOx burners and Rotating Opposed Fire Air systems. “This type of research suggests that satellites might someday play a useful role in tracking the effectiveness of efforts at individual facilities to reduce pollution,” noted Bryan Duncan, an atmospheric scientist at NASA Goddard Space Flight Center and lead author of the study.

However, careful interpretation of the satellite observations is required at this point because other sources of NOx (cars, factories, etc.) have to be untangled from power plant emissions, Duncan explained. He expects the process to become easier and more accurate as new satellites with better sensors reach orbit in coming years. In 2016, the European Space Agency, plans to launch the Tropospheric Ozone Monitoring Instrument (TROPOMI), a sensor with a better spatial resolution than OMI. No earlier than 2017, NASA plans to launch the Tropospheric Emissions: Monitoring of Pollution (TEMPO) satellite, which will collect data throughout the day rather than getting just one pass.

Read A Clearer View of Hazy Skies to learn more about air quality and how it has changed over time.