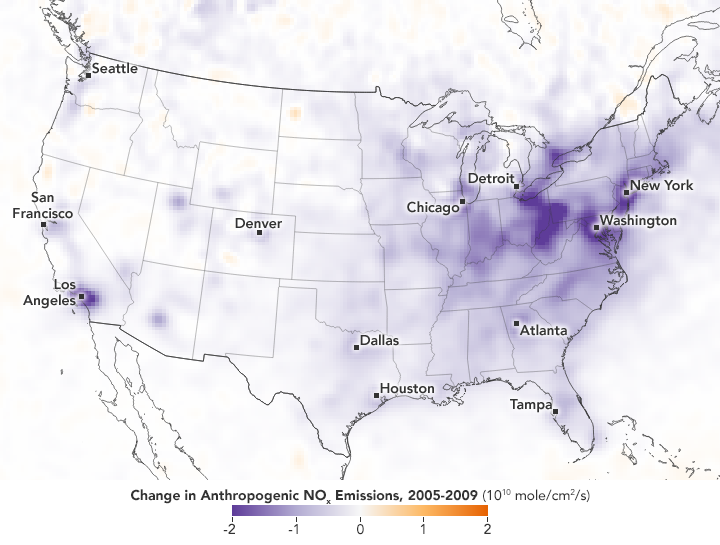 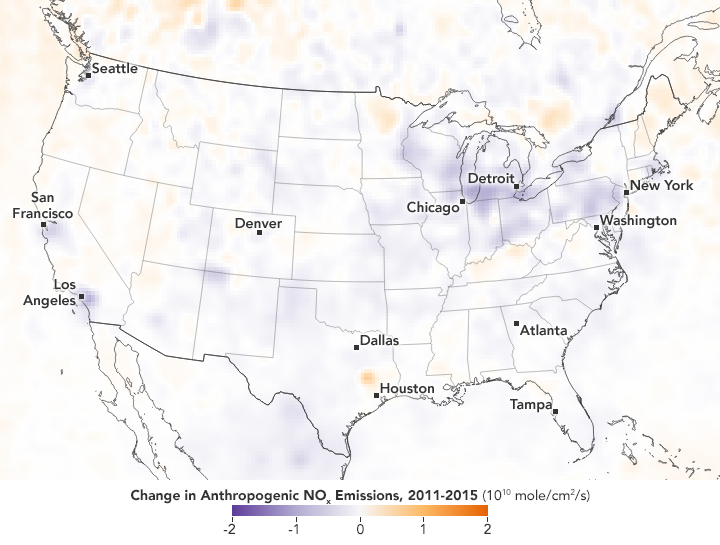 The air we breathe today in the United States is much cleaner than it was in the 1960s and 70s. But recent satellite data show that air quality is not improving as quickly as predicted by models.

“Air quality is better than it was decades ago, but now we’re starting to see the improvement slow down,” said Helen Worden, atmospheric scientist at the National Center for Atmospheric Research.

In a recent study supported by NASA, lead author Zhe Jiang, Worden, and a group of researchers used satellite data and advanced computer simulations to find that major air pollutants are not decreasing as rapidly as expected. That is, air quality is not improving as much as the U.S. Environmental Protection Agency’s (EPA) inventories and computer models indicate they should.

The team looked at two major air pollutants: carbon monoxide and nitrogen oxide (NOx). Both are emitted by cars, trucks, and other vehicles, and by industrial sources such as power plants. In the presence of sunlight, both chemical compounds are key ingredients in ground-level ozone and smog.

The maps above show the change in NOx emissions from 2005–2009 and 2011–2015. NOx decreased by 7 percent annually from 2005 to 2009, whereas overall emissions only decreased 1.7 percent annually from 2011 to 2015. The maps were assembled from data acquired by the Ozone Monitoring Instrument (OMI) on NASA’s Aura satellite and correlated with measurements from ground–based air monitoring systems.

The study also showed that carbon monoxide emissions have not declined as quickly as expected in recent years. Those data came from the Measurement of Pollution in the Troposphere (MOPITT) instrument on NASA’s Terra satellite. Both OMI and MOPITT provide global, standardized views of emissions that are not subject to differences in regional and national ground–based reporting.

“Ozone and other pollution standards are always health–based,” said Worden, a co–author of the study. “These emissions cuts are needed to reduce hospital visits and early mortality.”

The satellite observations and the EPA estimates showed similar carbon monoxide concentrations in recent years, but NOx satellite data differed from the EPA’s ground–based inventories, which are represented in the graph above. EPA data showed that NOx concentrations continue a consistent decrease after 2011, but satellite data show that the improvement was not as steady. EPA estimates are measured directly from sources and based on monitored readings or engineering calculations emitted by vehicles or factories, whereas the satellite data measures total emissions in the atmosphere over a large area.

One explanation for why NOx concentrations are not falling as quickly as the EPA estimated is that smaller emission sources may have a bigger role than previously thought. Federal and state regulations have been effective in controlling large-scale emissions from motor vehicles and power plants. But more subtle emission sources—such as industrial boilers, residential water heaters, and construction equipment—now play a relatively larger role. Researchers also found that changes in heavy-duty diesel trucks have not reduced NOx emissions in the real–world as much as laboratory emission tests suggested they would.

The study suggests these smaller sources could be better monitored to improve the accuracy of the EPA’s emission inventories. “We can use the trends derived from satellites to inform EPA inventory trends,” said Worden. “Satellite observations and the EPA’s inventories can be used together to give a more complete picture of the nation’s air quality.’ 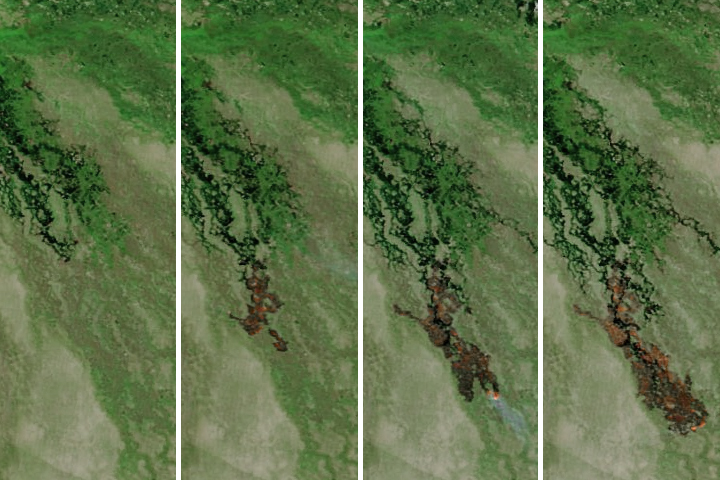