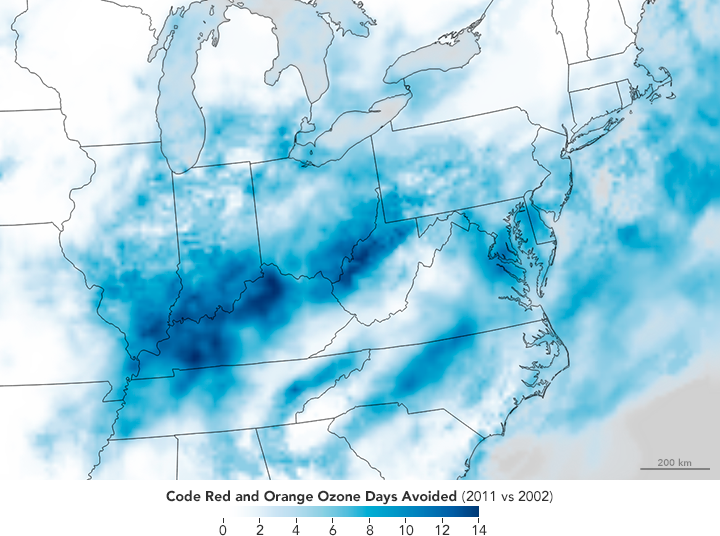 Our respiratory tracts have particular difficulty scrubbing ozone from air we inhale, even in comparison to some other pollutants such as sulfur dioxide. That means ozone infiltrates deep into the lungs, where it reacts with proteins and lipids on the surfaces of cells, often causing them to leak enzymes and plasma, the liquid portion of blood.

All this activity at the cellular level caused by ozone exposure has unmistakable consequences. The surfaces of lungs become red and inflamed. Coughing, throat irritation, chest pain, and shortness of breath often follow. If you live in a city and exercise outside, you have likely experienced the effects of ozone exposure, particularly on hot summer days. High temperatures promote chemical reactions in the atmosphere that lead to ozone buildup, so the hottest days of summer are often the smoggiest. People who exercise outdoors, young children, and the elderly are the most susceptible to ozone pollution.

In July 2011, bad air was on the minds of many in the Baltimore-Washington region as the area faced its hottest month on record. Thermometers at Baltimore/Washington International Thurgood Marshall Airport recorded 24 days with temperatures at or above 90 degrees Fahrenheit (32 degrees Celsius). Fourteen days qualified as code orange air quality days, meaning ozone concentrations near the ground averaged more than 75 parts per billion by volume (ppbv) over an eight hour period. Three days were code red, meaning maximum ozone averaged more than 95 ppbv.

That may sound bad, but it could have been much worse. The eastern United States has seen a sharp decline in ozone pollution over the past decade due to Environmental Protection Agency regulations limiting the emission of precursor gases that can turn into ozone. For instance, emissions of nitrogen oxides (NOx) dropped by about 40 percent between 2005 and 2011.

Logic dictates that such a sizable reduction would mean cleaner air, fewer code red and orange days, and fewer people ending up in the hospital with respiratory problems. A team of scientists—including researchers from the University of Maryland, NASA’s Goddard Space Flight Center, and the Maryland Department of Environment—decided to quantify the improvements and gain a better sense of what cleaner air means for people on the ground.

They used the Community Multi-Scale Air Quality (CMAQ) modeling system to simulate how pollution emissions at 2002 and 2011 levels would have affected overall air quality. The simulations showed that eastern cities avoided between three and nine code red and orange air quality days in July 2011 that would have occurred at 2002 emissions levels. The map above depicts the model output. Note: the Environmental Protection Agency standard for what constitutes a code red air quality was lowered in 2015; this map uses the standard that was in place in 2011.

The researchers also found that thousands of emergency room visits for asthma, pneumonia, and other respiratory problems were avoided due to the improving air quality. “The benefit of regional emissions reductions for meeting the ozone standard is clear,” said Christopher Loughner, the University of Maryland scientist who led the research.