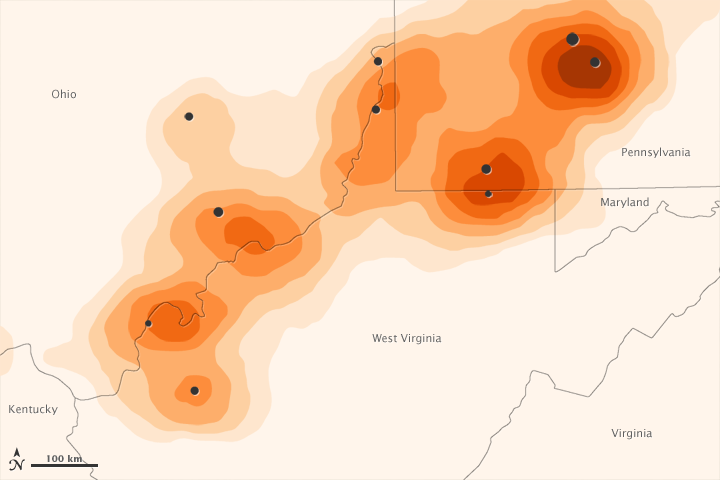 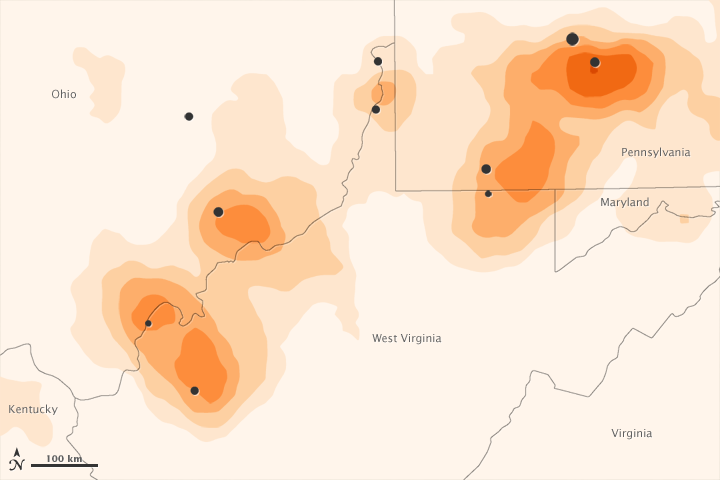 Scientists, regulators, and the electric power industry came together to address a pollution problem, and the result is cleaner air in the United States. The pollutant is sulfur dioxide, a key emission from coal-fired power plants that contributes to the formation of acid rain and to respiratory health problems.

Those reductions are visible in the maps above, which depict average SO2 concentrations along the Appalachian Mountain states from 2005 to 2007 (top) and 2008 to 2010 (bottom). Black dots on the map indicate the location and relative size of power plants.

Scientists attribute the decline to the Clean Air Interstate Rule, issued by the U.S. Environmental Protection Agency in 2005. The regulation capped emissions but left it up to power companies to determine how to reduce them. In response, many power plants installed desulfurization devices and took other steps to limit the release of sulfur dioxide.

The new observations from the Ozone Monitoring Instrument confirm ground-based measurements that had shown declining sulfur dioxide levels. While scientists have previously used OMI to observe SO2 within large plumes of volcanic ash or over heavily polluted cities, this is the first time the instrument has been used to observe such subtle details. Fioletov and colleagues developed a mathematical technique that makes it possible to detect emissions down to levels about four times lower than previously possible.

The research also demonstrates how scientists could monitor emissions throughout the world, even in places where ground measurements are sparse. The researchers focused their analysis on the United States to take advantage of a robust network of ground-based instruments which monitor emissions from smokestacks. The ground instruments logged a 46 percent decline in SO2 levels since 2005—a finding consistent with the 40 percent reduction observed by OMI.

“Now that we’ve confirmed that the technique works, the next step is to use it for other parts of the world that don’t have ground-based sensors,” said Nickolay Krotkov, a researcher based at NASA’s Goddard Space Flight Center and a coauthor of the new paper. “The real beauty of using satellites is that we can apply the same technique to the entire globe in a consistent way.”