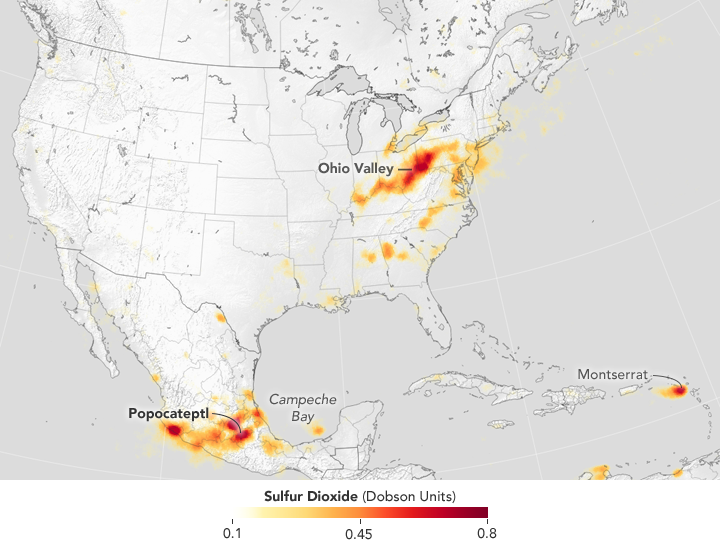 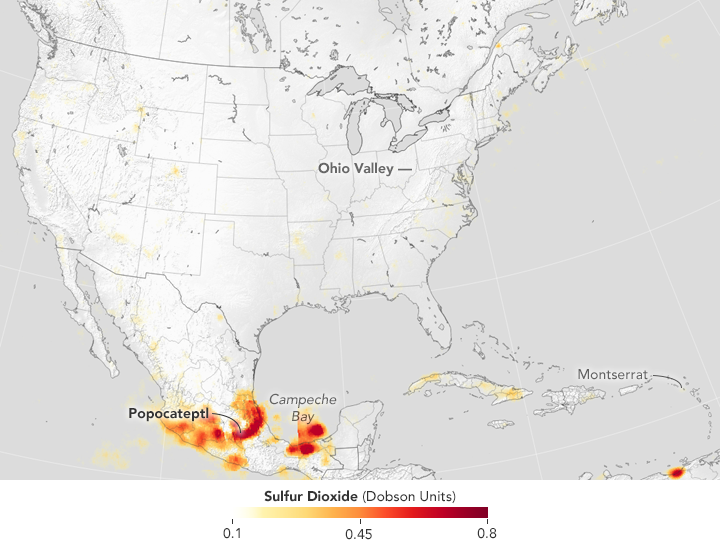 For more than a decade, the Ozone Monitoring Instrument (OMI) on NASA’s Aura satellite has observed changes in a critical air pollutant: sulfur dioxide (SO2). In addition to harming human health, the gas reacts with water vapor to produce acid rain. Sulfur dioxide also can react in the atmosphere to form aerosol particles, which can contribute to outbreaks of haze and influence the climate.

Since Aura launched in 2004, scientists at Environment and Climate Change Canada, NASA Goddard Space Flight Center, University of Maryland, Michigan Technological University, and other research centers have been refining their analytical techniques and developing increasingly accurate ways of identifying and monitoring major sources of sulfur dioxide. This has produced an increasingly clear picture of where the gas comes from and how the amount entering the atmosphere has changed over time.

The story of change that OMI has witnessed over North America is particularly varied and interesting. In some areas, emissions have dropped significantly; in others, they rose. In many areas, human activities played the dominant role; in others, natural processes did.

In 2016, scientists published a global catalog of large sulfur dioxide sources as observed by OMI. Of the 92 major “hot spots” of sulfur dioxide in North America, 9 of them are volcanoes, 71 are power plants, 4 are smelters, and 8 are oil refineries. Note that some of the hot spots may represent multiple sources. The bulk of emissions in North America come from human activity; volcanoes represent about 30 percent of the total emissions.

As seen in the maps here, one of the most noticeable changes occurred in the Ohio Valley of the eastern United States. Sulfur dioxide in that region comes mainly from coal-fired power plants. According to OMI, emissions dropped by more than 80 percent between 2005 and 2016, mainly because of new technologies, laws, and regulations that promoted cleaner burning.

Major sulfur dioxide sources in Mexico include several power plants in western Mexico, oil infrastructure in and along the Bay of Campeche, and active volcanoes. In particular, Popocatépetl, which is just 70 kilometers (40 miles) from Mexico City, is near several power plants and oil refineries. “There are very few places in the world where such strong anthropogenic and volcanic sulfur dioxide sources are so close together,” noted Simon Carn of Michigan Tech.

OMI detected more sulfur dioxide over Mexico in 2016 than in 2005, according to the researchers. However, the mix of sources in Mexico makes it more difficult to understand the change. In 2017, Carn authored a study indicating that degassing at Popocatépetl had roughly doubled the volcano’s emissions. (Note: Degassing is a constant process that occurs even when a volcano is not actively erupting).

Meanwhile, other research based on OMI observations suggests that emissions from gas and oil facilities in and around the Gulf of Campeche also increased. The 10 to 15 percent increase OMI observed from industrial sources in Mexico, the researchers pointed out in a 2016 study, is not reflected in ground-based emissions inventories, which report a significant decline in emissions. The hotspots from power plants in western Mexico show more mixed trends. Some have shown decreases, while others have stayed roughly the same.

There are fewer sulfur dioxide sources in the Caribbean, but OMI has observed a subtle increase over some smelters and power plants. A much more notable shift occurred around the volcanic island of Montserrat. Though the volcano was a significant source of the gas in 2005, its emissions have declined significantly since 2010.