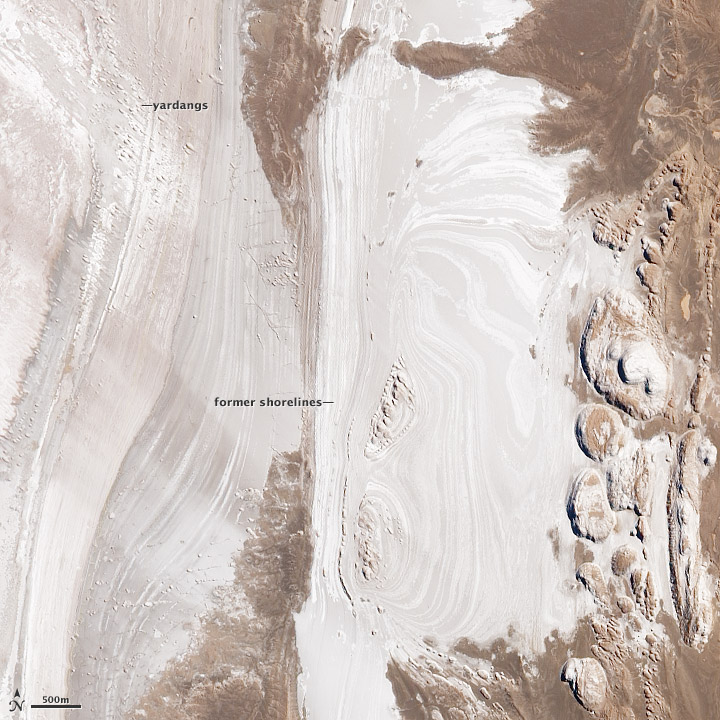 Today's image is the answer to Earth Observatory’s June Puzzler.

In the arid, high plateau of Argentina’s Salta province, just east of the Atacama Desert and the eastern cordillera of the Andes Mountains, dry lake beds indicate a time when the landscape was bathed in water. Today it is dry rock crusted in salt—the remnants of evaporation, baking sunlight, and fierce winds. This is the Salar de Arizaro.

This image of the Arizaro salt flats was acquired on April 7, 2013, by the Advanced Land Imager on NASA’s Earth Observing-1 satellite. Thin, parallel lines cut north-south across much of the image, bathtub rings showing the positions of past shorelines when the lake still had water.

In the upper left corner, small rounded bumps in the landscape are yardangs, dusty hills formed when soft rocks are weathered and abraded by winds. The yardangs are aligned precisely with the southwesterly winds. On the right, bulbous hills have sharps edges, a formation typical of salt weathering around the base. During salt weathering, rocks are eroded by repeated salt crystal growth. The eroded material has been blown away by the strong winds of the high desert, leaving the sharp edge.

Spanning more than 1,600 square kilometers (600 square miles), Salar de Arizaro is the sixth largest salt flat in the world. The region is rich in salt formed between five to ten million years ago, when a salty inland sea may have covered the land. Iron, marble, onyx, potassium, boron, and copper are also relatively abundant.

One of the world’s largest salt flats sits atop the high plateau of northwest Argentina. 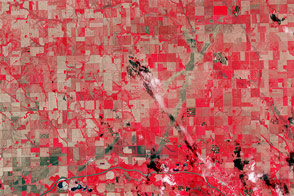