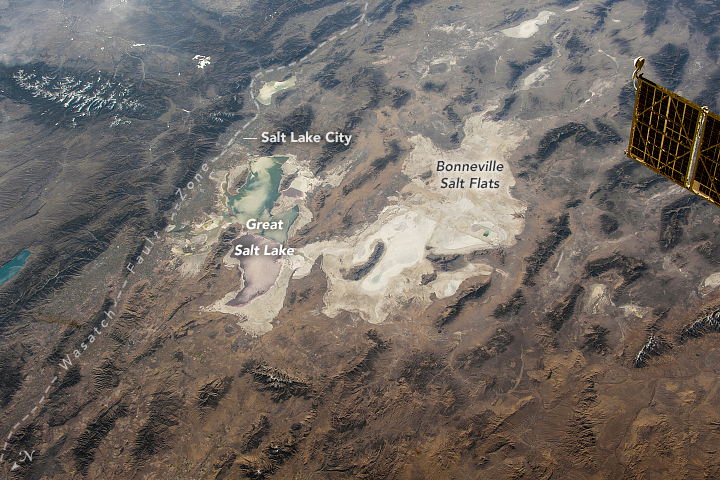 An astronaut aboard the International Space Station (ISS) focused a camera lens on the Bonneville Salt Flats of northeast Utah—the light-toned, patchy feature in the middle of the image. The flats are famous for being one of the flattest places on Earth, and racing enthusiasts flock to the region each year to watch new attempts to set land-speed records.

East of the Bonneville Flats lies the growing urban area around Salt Lake City, which is barely visible to astronauts during the day due to the low contrast with the surrounding mountains. In contrast, the colorful waters of the Great Salt Lake stand out against the desert landscape.

The Bonneville Salt Flats are remnants of a large lake that inundated much of Utah between 14,000 and 32,000 years ago. The greatest extent of ancient Lake Bonneville was about 520 kilometers (320 miles) long and 220 kilometers (130 miles) wide. The lake was fed by glacial melt water during the spring and summer seasons of the most recent glacial period. Since Lake Bonneville had no outlet, that water eventually evaporated in place and left behind white salt minerals.

From the vantage point of the ISS, landscape patterns reveal the intermingling of older geologic formations and more recent landforms in this region. The relatively young (in geologic terms) Bonneville Salt Flats are located within the Basin and Range Province, a region that formed from the stretching of Earth’s crust by massive tectonic forces over the past 17 million years. At the top left, we see a different style of geology: the Middle Rocky Mountain region, separated by the active Wasatch Fault zone. This fault zone has violently disrupted the region with at least 22 large-magnitude earthquakes in the past 6,000 years.

Astronaut photograph ISS053-E-134166 was acquired on October 24, 2017, with a Nikon D4 digital camera using a 50 millimeter lens, and is provided by the ISS Crew Earth Observations Facility and the Earth Science and Remote Sensing Unit, Johnson Space Center. The image was taken by a member of the Expedition 53 crew. The image has been cropped and enhanced to improve contrast, and lens artifacts have been removed. The International Space Station Program supports the laboratory as part of the ISS National Lab to help astronauts take pictures of Earth that will be of the greatest value to scientists and the public, and to make those images freely available on the Internet. Additional images taken by astronauts and cosmonauts can be viewed at the NASA/JSC Gateway to Astronaut Photography of Earth. Caption by Andrea Meado, Jacobs Technology, and Justin Wilkinson, Texas State University, JETS Contract at NASA-JSC. 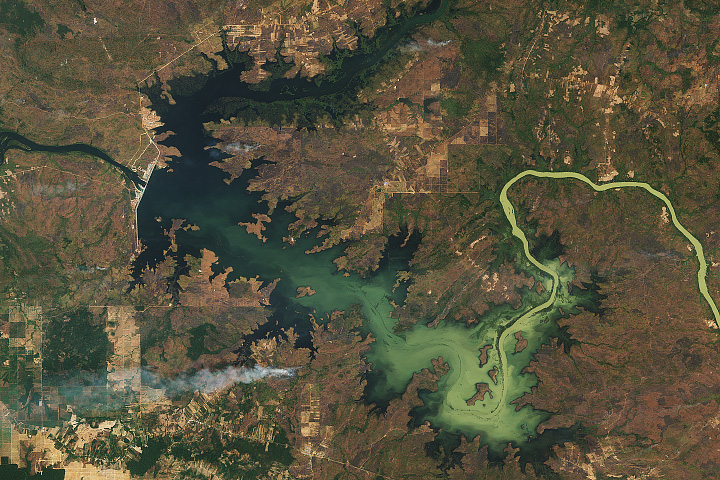