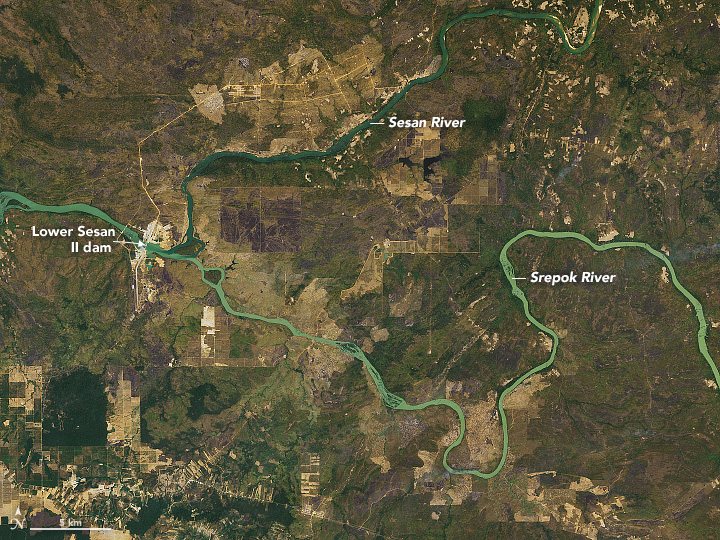 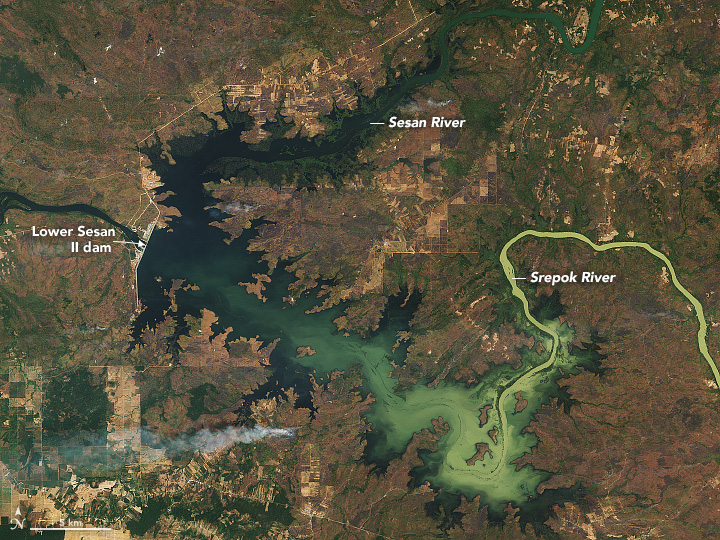 As recently as 2010, only 3 percent of Cambodia’s domestically generated electricity came from hydropower. By 2016, hydropower was the source of 60 percent of it.

The completion of the Lower Sesan II dam in Stung Treng province will give hydropower yet another boost. At full capacity, the $800 million project is designed to generate 400 megawatts of electricity, making it the biggest hydropower station in the country. Water levels began to rise in September 2017, when the dam’s floodgates were closed. In November 2017, the first turbine began to generate power. By October 2018, all eight turbines are expected to be operating.

The Operational Land Imager (OLI) on the Landsat 8 satellite captured these before and after natural-color images of the dam and reservoir. They were built near the confluence of the Sesan River (Tonlé San in Cambodian) and Srepok River, both tributaries of the Mekong River. The first image was acquired on February 14, 2017; the second one shows the same area on February 1, 2018. The brown and light green areas in the first image, particularly those with straight edges, were likely cleared recently for timber; some of the smaller tan areas were crop fields near villages. Densely forested areas are green.

In a country where only 50 percent of rural communities have access to the electrical grid, the boost in generating capacity will help with a government-led effort to bring electricity to all Cambodians by 2022. The project is also expected to reduce the cost of electricity.

However, the dam and its 75 square-kilometer (29 square-mile) reservoir will also have significant impacts on communities near the river. Though some communities have resisted moving, rising waters have forced thousands of people to leave their villages. Scientists have cautioned that the Mekong Basin could see a 9 percent drop in the availability of fish.