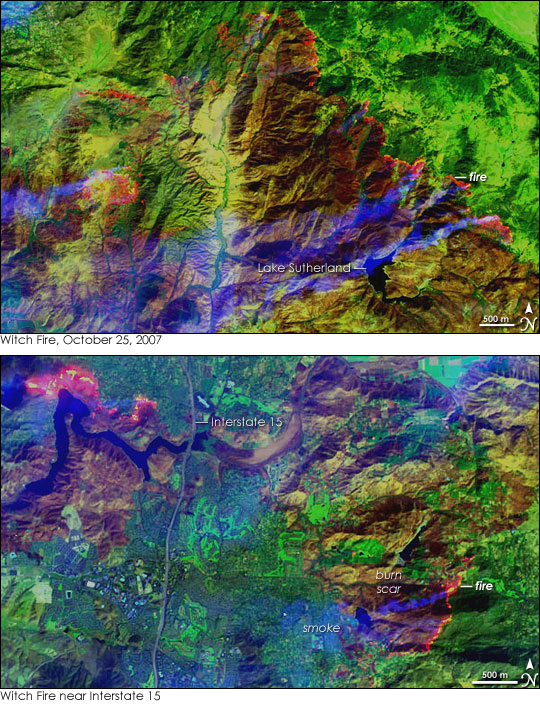 By October 25, the Witch Fire burning in San Diego County, California, had started to subside. Fierce winds that propelled the flames across 197,990 acres quieted, giving fire fighters a chance to battle the flames. However, the massive fire was still just 30 percent contained when NASA’s Advanced Land Imager sensor on the EO-1 satellite captured this image on October 25, 2007. The image shows the fire burning around Ramona, California, north of downtown San Diego. Flames glow red, yellow, and orange in the infrared-enhanced image, and plumes of smoke are faintly visible traces of blue. The drought-dry vegetation is deceptively green, though irrigated lawns are brighter in tone than natural vegetation. Dark brown-red covers land charred in the wake of the flames.

The top image shows one front of the fire in the mountains immediately east of Ramona. The flames follow the jagged line of the ridge. The west side of the mountain is burned, providing a clearer view of the rough terrain that made fighting the fire so difficult. The burn scar also makes it easier to see the canyons that channeled the strong Santa Ana winds from inland high-altitude deserts in the east toward the Pacific Ocean in the west. The image only shows part of the burned area. The fire extended much farther to the west.

The lower image shows sections of the fire near the western edge of Ramona. Neatly shaped lawns and silver-blue roof-tops reveal that this is a residential area. Interstate 15, which runs vertically through the image, was flanked by two actively burning segments of the Witch Fire. Spots of red within the burned landscape point to hotspots where the fire still smolders. The San Diego Tribune reported that firefighters expected to contain the fire by October 28. As of October 26, the Witch Fire had killed two people, injured an additional 14, and destroyed 1,061 homes and 30 commercial properties, said the Tribune.