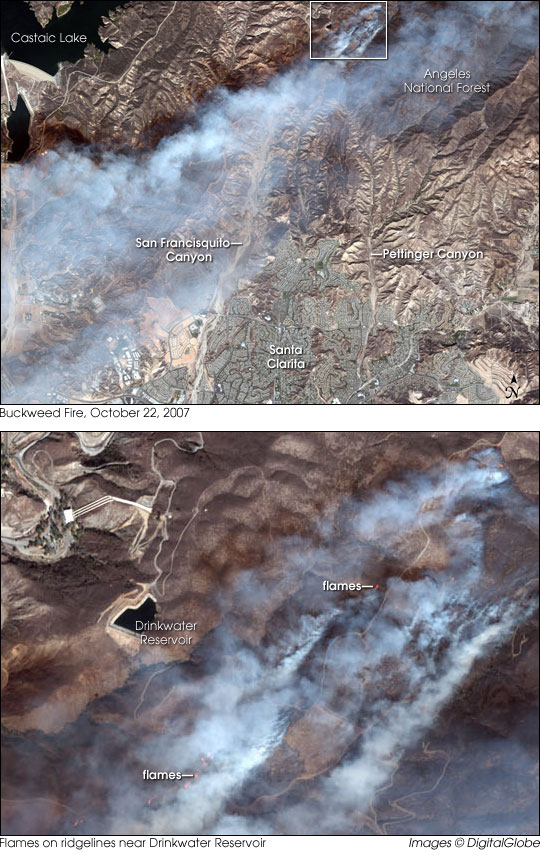 Encouraged by parched vegetation and relentless Santa Ana winds, California wildfires exploded over the weekend of October 20, 2007, affecting areas from San Diego north to Los Angeles. By the time the wind patterns began to change on October 25, three people had died, more than 3,000 homes and businesses had burned, and half a million residents had been evacuated, according to news reports.

DigitalGlobe’s commercial Quickbird satellite captured this image of one of the fires, the Buckweed Fire in Los Angeles County, on October 22, 2007. On the northern fringes of Santa Clarita (north of Los Angeles), this fire ignited on October 21 and crept toward a Santa Clarita subdivision between San Francisquito Canyon and Pettinger Canyon. A day later, Quickbird captured the fire’s billowing smoke.

The top image shows the larger area, with Castaic Lake in the west, Angeles National Forest in the east, and the city of Santa Clarita in the south. In this image, the curving suburban streets carve ant-like lines on the landscape almost directly south of the fire. Paved surfaces and buildings are even more prominent in the southwest, but they are almost completely hidden by blue-gray smoke that blows in that direction. The bottom image is an enlargement of the fire, in which bright red flames are clearly visible. Not far from Drinkwater Reservoir, these hotspots of wildfire activity send thick smoke coursing toward the southwest.

According to the California Department of Forestry and Fire Protection, the Buckweed Fire was 100 percent contained by October 25, 2007, having burned a total of 38,356 acres (155 square kilometers). Although substantial, this fire was only a fraction of the size of the Witch Fire, which was 20 percent contained on the same day, having burned 197,990 acres (800 square kilometers). News reports indicated that, despite the loss of property, California officials had expressed relief that casualties were lower than they had been in the October 2003 firestorm, attributing the lesser loss of life to better communication and fire response. Changing weather patterns on Wednesday and Thursday (October 24 and 25) not only enabled air tankers to step up fire fighting measures, but also promised cooler, more humid weather, although forecasters warned that this more favorable weather might not last.