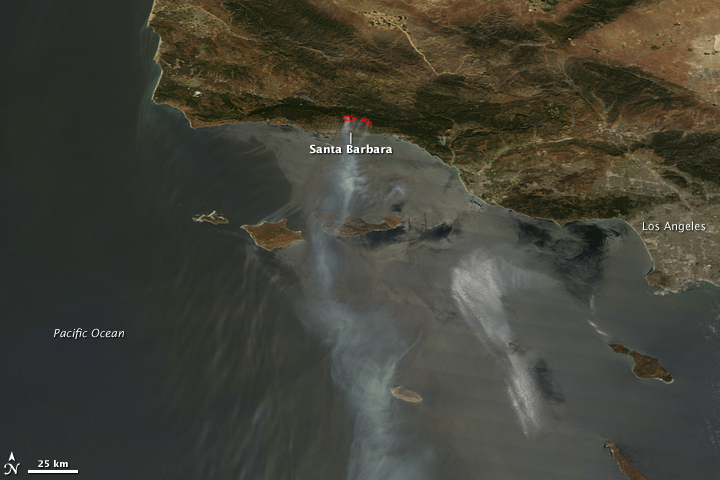 By the morning of May 8, 2009, the Jesusita Fire in the hills around Santa Barbara, California, had damaged or completely destroyed 75 buildings, forced the evacuation of 20,000 residents, and threatened the homes of another 16,000 residents, according to ABC News. By the afternoon of May 9, 2009, more than 30,000 residents were under evacuation orders, the Los Angeles Times reported.

The Moderate Resolution Imaging Spectroradiometer (MODIS) on NASA’s Terra satellite captured this image of the Jesusita fire at 11:55 a.m. local time (18:55 UTC) on May 8, 2009. The red outlines show locations where MODIS detected fire. Plumes of smoke blow southward over the ocean, and the plume from the western portion of the fire is larger and thicker.

Strong, relentless winds doubled the fire’s size to 3,500 acres (14 square kilometers) on the might of May 7-8, 2009, and firefighters stated that quick wind shifts sent the fire in all directions, according to ABC News. Along its western margin, the fire jumped Highway 154 near San Antonio Creek Road, but although the expanded blaze threatened hundreds of homes, firefighters managed to limit the damage. One building lost, according to the Los Angeles Times, however, was a century-old building at the Santa Barbara Botanic Gardens. The Times also reported that three Ventura County firefighters had been injured in the fire and were receiving treatment at a local burn center.

Pushed by strong winds, the Jesusita fire near Santa Barbara, California, had damaged or destroyed at least 75 buildings and forced the evacuation of thousands of residents by May 8, 2009.