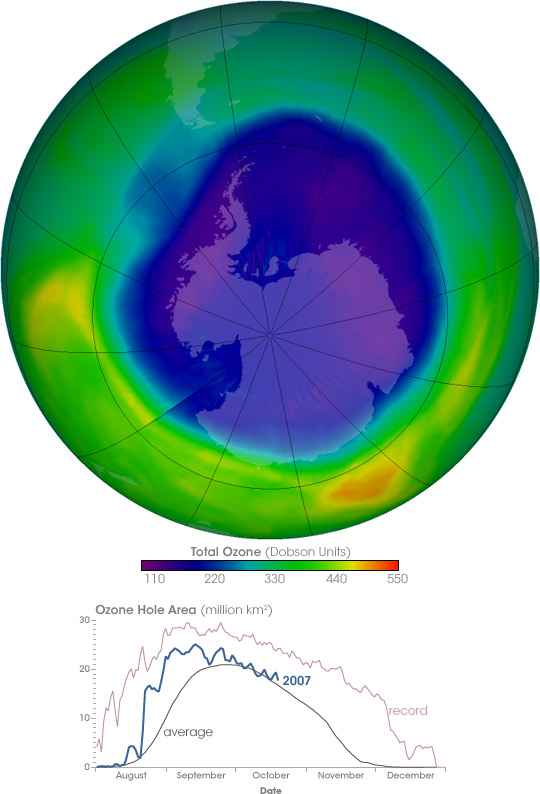 Each year, the ozone hole over the Southern Hemisphere reaches its largest size during September. Data from NASA’s Aura satellite show that the annual ozone hole peaked in size on September 13, reaching 9.7 million square miles, slightly larger than North America. That’s “pretty average,” says Paul Newman, an atmospheric scientist at NASA Goddard Space Fight Center, when compared to the area of ozone holes measured over the last 15 years. Still, the extent this year was “very big,” he says, compared to the state of the ozone layer in the 1970s, when the hole did not yet exist.

This image shows ozone concentrations measured by the Ozone Monitoring Instrument over the Southern Hemisphere in colors from purple (low concentration) to red (high concentration). The graph shows the annual changes in ozone hole area for 2007 (blue), for the record size hole in 2006 (light red), and the long-term average size for 1979-2006.

The reason the ozone hole peaks in size during early Southern Hemisphere spring is that chemical reactions that create ozone-destroying chemicals like chlorine gas (two joined chlorine atoms) occur on the surface of droplets in polar stratospheric clouds, and these clouds form mostly during the dark, frigid polar winter. When sunlight returns to the Southern Hemisphere in spring, ultraviolet light splits the chlorine gas molecules into single chlorine atoms. Each single atom can catalyze the destruction of thousands of ozone molecules. As spring advances, wind patterns change. Air from lower latitudes mixes into the polar region, the chlorine gas disperses, and the ozone layer stabilizes until the next spring.

Production of ozone-destroying chlorofluorocarbons (CFCs) has stopped due to international participation in the Montreal Protocol treaty, but scientists don’t expect to see the hole significantly shrink for about another decade, Newman says. This lag is due to the long lifetimes (40-100 years) of CFCs already in the atmosphere. Full recovery is expected by about 2070. But even that prediction is tentative, Newman says, because scientists remain uncertain about how a changing climate will come into play. Because intense cold exacerbates the ozone hole, it is possible that warming over the South Pole could speed up recovery.

NASA image and graph by Robert Simmon, based on data from Ozone Hole Watch.