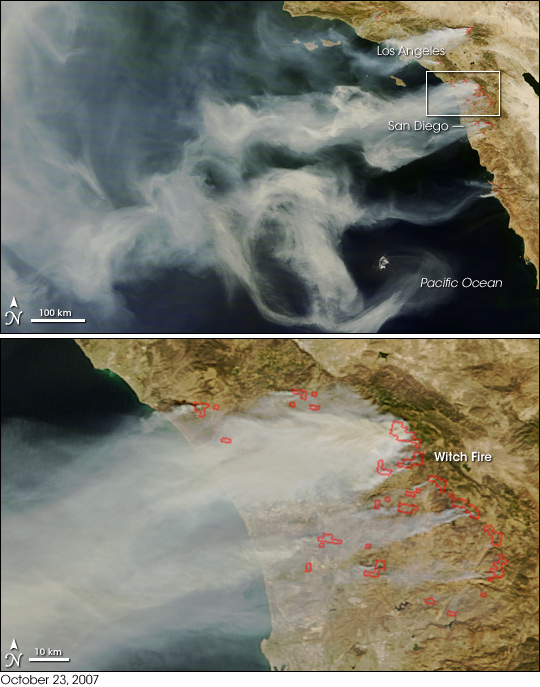 Fueled by the powerful Santa Ana winds that whip from the high-altitude deserts of the Great Basin toward the Pacific Ocean, 12 large wildfires raged in California on October 23, 2007. The fires clouded the air over the Pacific with dense plumes of smoke that stretched across hundreds of kilometers. The immensity of the event is illustrated in the top photo-like image, captured by the Moderate Resolution Imaging Spectroradiometer (MODIS) on NASA’s Terra satellite on October 23. The lower image shows a close-up view of the Witch Fire, burning between Los Angeles and San Diego. At the time the image was taken, the fire had burned 145,000 acres, destroying hundreds of homes and commercial buildings, and threatening thousands more, said the National Interagency Fire Center. Areas where MODIS detected a fire are outlined in red, though the dense smoke may have masked some of the flames from the sensor’s view.

As the top image shows, the Witch Fire was not the only destructive fire burning in southern California. As of October 23, fires stretched from the Mexican border to north of Los Angeles, burning more than 1,300 homes and forcing more than half a million people from their homes, reported CNN. Windy weather pushed the flames through brush and grass dried from drought.

The high-resolution image provided above is at MODIS’ full spatial resolution (level of detail) of 250 meters per pixel. The MODIS Rapid Response System provides this image at additional resolutions. Additional images for this event can be found in the Natural Hazards: Fires section of our Website.

Fires bore down on San Fernando and Yorba Linda, California, on November 16, 2008.

Fires bore down on San Fernando and Yorba Linda, California, on November 16, 2008.