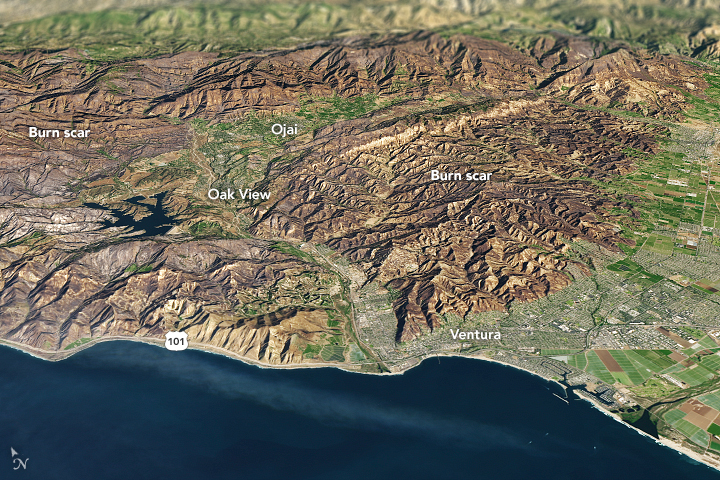 It is rare for large wildfires to burn in California in December, which is usually a wet month for the state. In most years, a few hundreds acres might burn. The 2006 Shekell fire in Ventura charred 13,600 acres, making it the largest December fire in the state between 2000 and 2016.

In 2017, the Thomas fire shattered the record for December and may soon eclipse the worst blaze in any month. After burning for 16 days, the massive fire had scorched 272,000 acres (110,000 hectares or 425 square miles) and was just 60 percent contained. That made it the second largest fire on record in California, trailing only the Cedar fire, which burned 273,246 acres in 2003.

The Operational Land Imager (OLI) on Landsat 8 captured an image of the Thomas fire scar on December 18, 2017. The natural-color Landsat 8 image was draped over an ASTER-derived Global Digital Elevation Model, which shows the topography of the area. The fire raged first near Ventura, then burned the hills around communities of Ojai and Oak View. Firefighters put up a fierce fight and managed to prevent flames from descending into the valley towns. Flames then pushed west toward Summerland, Montecito, and Santa Barbara. As of December 20, the fire was still spreading along the northern edge of the burn scar.

Authorities reported that more than 1,200 structures—most of them in Ventura County—have been destroyed. Several factors came together to make the blaze difficult to control. An usually wet winter and spring in early 2017 caused vegetation to flourish. Then the dry season turned out to be excessively dry, and rains also have been scarce in the typically wetter months of November and December. All of that vegetation dried out and was primed to burn. Once the fire started, warm temperatures and unusually fierce Santa Ana winds caused the fire to spread rapidly.

After nearly two weeks of red flag conditions, a break in the weather has allowed firefighters to beat back the flames in the past few days. But fire officials still do not expect the Thomas fire to be completely contained until January 2018.