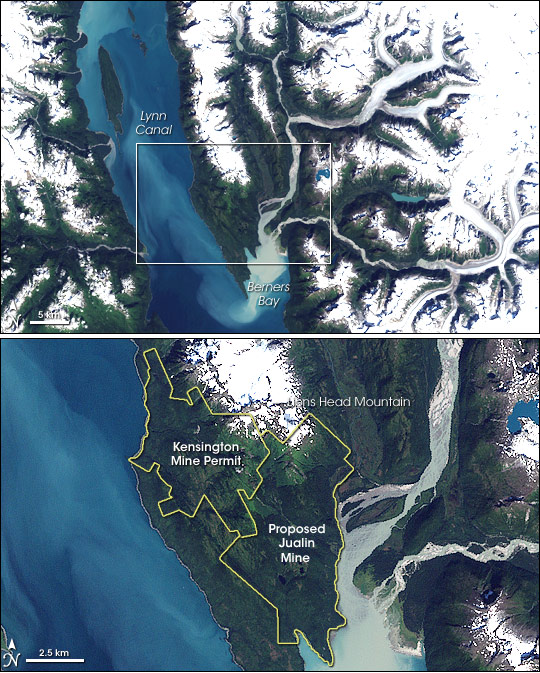 Alaska has a long history of attracting wilderness and wildlife seekers as well as those who seek to make money from the state’s abundant natural resources—from timber to gold. Among the places where those two human ideals intersect is the Berners Bay area of the Tongass National Forest. On a peninsula roughly 72 kilometers (45 miles) north of Juneau are two historic mines: Kensington and Jualin. The Kensington mine was active from 1897 to 1938, and its neighbor Jualin was in operation from 1896 to 1928. In 1992, after the mines lay dormant for decades, the U.S. Department of Agriculture Forest Service began approving a series of plans for the Kensington Gold Project that would reopen both mines.

On August 15, 2001, the Enhanced Thematic Mapper Plus sensor on NASA’s Landsat satellite acquired this image of Berners Bay, showing the location of the Kensington Gold Project. The site occupies the peninsula between Lynn Canal and Berners Bay. The top image shows the larger area while the bottom image zooms in on the Kensington Gold Project. Even in this summertime shot, snow and ice linger on the far-north landscape; snow caps Lions Head Mountain at the southern end of the Kakuhan Range Mountains. Snow- and ice-free areas are largely covered by dark green forests. The lighter green vegetation may be alpine tundra or areas disturbed by mining activities (current or historical).

The right half of the top image shows a network of glaciers flowing toward the sea. As they near the ocean, these rivers of ice turn into rivers of water, but they also carry considerable loads of glacial flour—tiny rock particles made by ice grinding against rock—that give the water a pale gray-green color. Near the proposed site of the Jualin Mine, sediments are thick enough to color the water nearly white. Farther south in Berners Bay, the color of the water darkens as sediments thin. Some of the sediment appears to make a U-turn and push up toward the northwest. The varied shades of blue in Lynn Canal likely result from several glaciers carrying sediment toward the sea.

The proposed mine areas appear in the bottom image, outlined in yellow. According to the Alaska Department of Natural Resources Division of Mining, Land and Water, the Kensington Project involved a few proposals for resuming mining operations. The original proposal, submitted in 1992, called for underground mining to process the ore through cyanidation—extracting gold by dissolving it in a weak cyanide solution. Subsequent plans for recovering the gold proposed using degradable detergents and flocculants (chemicals that cause particles to stick together) instead of cyanide. The challenge of handling the tailings—the material left over from the ore processing operation—in a way that would safeguard water quality in the popular outdoor recreation area had not been resolved as of fall 2007. A lawsuit by conservation organizations in 2006 stopped plans for the tailings to be placed in Lower Slate Lake (dark blue oval south of the Jualin label), which the groups argued would violate the Clean Water Act. As of October 2007, industry, government, and conservation groups were still discussing alternatives for disposing of the tailings.

You can download a 28.5-meter-resolution KMZ file of Berner’s Bay and the region around the Kensington and Jualin Mine sites suitable for use with Google Earth. 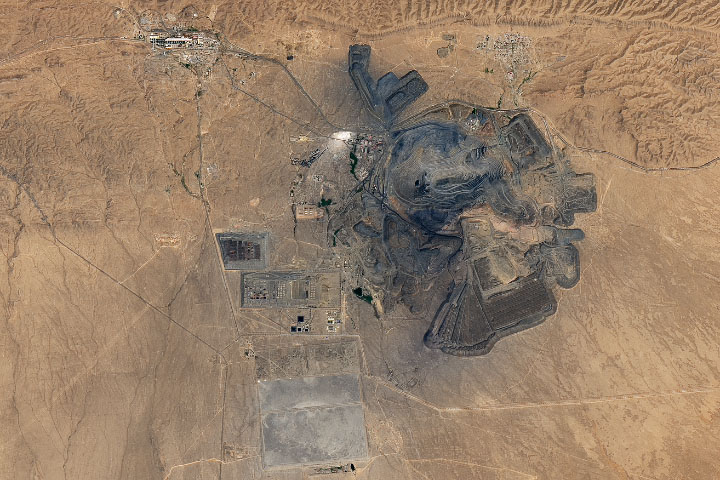