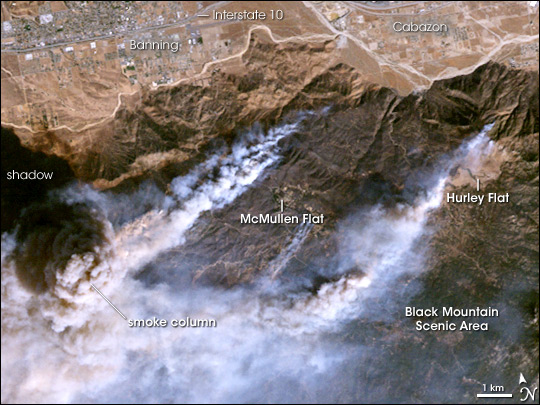 In late October, a fierce forest fire flared up in the mountainous terrain west of Palm Springs, California. The Esperanza Fire started in the foothills at the southern outskirts of the town of Cabazon, apparently as an act of arson. Driven by Santa Ana winds out of Great Basin deserts to the east, the fire raced over more than 40,000 acres in a matter of days, destroying 34 homes and 20 outbuildings in the area. Several firefighters died while battling the blaze.

This high-resolution satellite image of the fire was captured on October 26, 2006, by the Thematic Mapper sensor on NASA’s Landsat 5 satellite. The image was captured at 11:16 a.m. Pacific Daylight Time, roughly 10 hours after fire officials believe the fire began. At the top of the scene, the towns of Banning and Cabazon line Interstate 10, which appears as a thick, gray ribbon running through the dry, brown valley of San Gorgino Pass. Regular geometric shapes—straight lines and rectangles—are roads and buildings. Meandering, pale tracings show the paths of dry creeks and rivers.

To the south, the foothill ranges of the San Jacinto Mountains begin. Fire was burning along ridgelines near McMullen and Hurley Flats. Gray-brown smoke stretches southwest in long plumes. A towering column of smoke west-southwest of McMullen flat casts a dramatic black shadow to the northwest. At the time of this image, the fire had already burned almost the entire landscape between Hurley Flat and the valley floor to the north, as well as nearly all the terrain bounded by the smoke plumes. Although the difference is subtle, burned areas appear charcoal-tinged when compared to unburned vegetation, such as the forested slopes of the Black Mountain Scenic Area at lower right. Unburned vegetation appears brownish-green.

Waves of gray-brown smoke from the Esperanza Fire washed over the mountains southeast of Los Angeles and out over the Pacific on October 26, 2006.