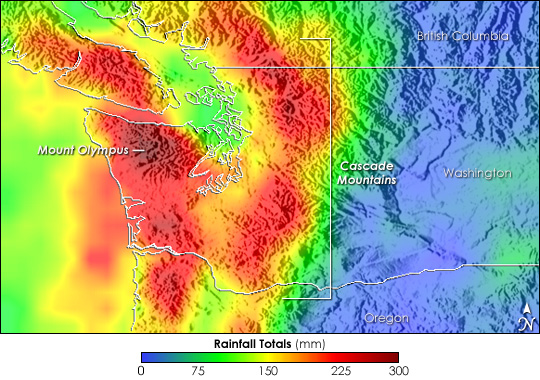 Record rainfall fell over parts of the northwestern United States during the first week of November 2006. Stampede Pass in western Washington received 8.22 inches of rain on Monday, November 5, to set a new all-time, one-day total. Six rivers reached record crests in the region. By early on November 8, one person had died, and two were missing as a result of the flooding, said news reports.

This image shows rainfall totals for October 31 through November 8, 2006, based in part on data from the Tropical Rainfall Measuring Mission (TRMM) satellite. According to the TRMM-based, near-real time, Multi-satellite Precipitation Analysis produced at NASA’s Goddard Space Flight Center, the highest rainfall totals for the period are near 250 millimeters (~10 inches, shown in darker red) and occur over Mount Olympus west of Seattle, Washington. The image illustrates the influence of mountains on the storm. Stripes of red, representing the heaviest rainfall, cover the Coastal Range (left) and the windward slopes of the Cascade Mountains (right). Some areas of heavy rain, however, do extend out over the Pacific, off of the Washington coast.

The weather pattern responsible for all of the rain is known as the Pineapple Express. The Pineapple Express is really just the subtropical jet steam, a stream of fast-moving air that carries moisture originating around the Hawaiian Islands northeast towards the West Coast. This moisture can then be drawn into storm systems as they approach the West Coast. In this case, a slow-moving storm system tapped into this tropical moisture to generate heavy rainfall. The coastal topography also aided in squeezing out the moisture as air was lifted over the mountain ranges.