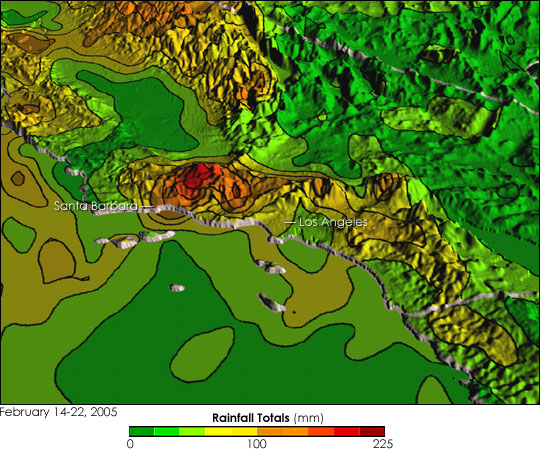 Another series of storms and rainy weather has brought yet another round of flooding, mudslides and sink holes to California that have so far claimed at least six lives. Called the Pineapple Express, the storm pattern has become all too familiar to residents of Southern California this winter. The Pineapple Express is actually the subtropical jet steam. Moisture originating around the Hawaiian Islands is carried northeast by the subtropical jet steam towards the West Coast. This moisture then feeds into storm systems as they rotate around a persistent, large upper-level trough of low pressure west of California. This pattern can result in a series of moisture-laden storm systems impacting the West Coast for several days at a time. A similar pattern occurred in early January.

The likely cause of this type of pattern is an intraseasonal oscillation known as the Madden-Julian oscillation. Typically an enhanced area of heavy rain propagates eastward from the Indian Ocean and into the West Pacific and Central Pacific Ocean. In association with this, the jet stream migrates eastward until moisture is drawn into the upper-level West Coast trough.

The TRMM-based, near-real time Multi-satellite Precipitation Analysis (MPA) at the NASA Goddard Space Flight Center monitors rainfall over the global Tropics. MPA rainfall totals are shown here for February 14-22, 2005, during the height of the most recent Pineapple Express. The highest rainfall totals for the period are near 200 mm (about 8 inches, shown in red) and occur in the Santa Ynez Mountains, part of the coastal range, just inland from Santa Barbara. Mountains aid in squeezing out moisture as moist air rides up and over the slopes. MPA rainfall totals for Los Angeles are between 50 and 75 mm (about 2 to 3 inches). Higher amounts between 50 and 150 mm (between 2 to 6 inches, yellow and orange areas) are shown over much of the coastal range and the Sierra Nevada.

A graph of the rainfall totals between February 14 and February 22 shows that the heaviest rain fell late on February 18, with smaller, but significant rainfall occurring on February 19 and 21. The animations provided above tell a similar story as the progression of the storms unfolds over time.

Another episode of heavy rain drenched Southern California between February 18 and February 22, 2005. TRMM shows that the highest rainfall totals were in mountainous, coastal regions, prone to flooding and landslides.