Snow on Sand near Dunhuang, China 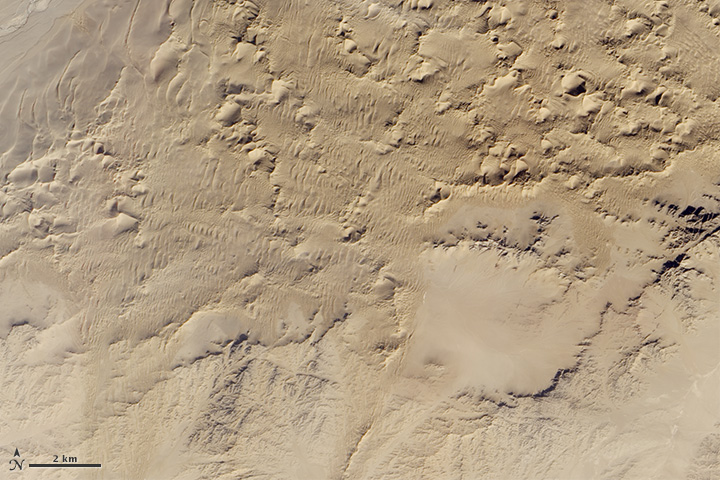 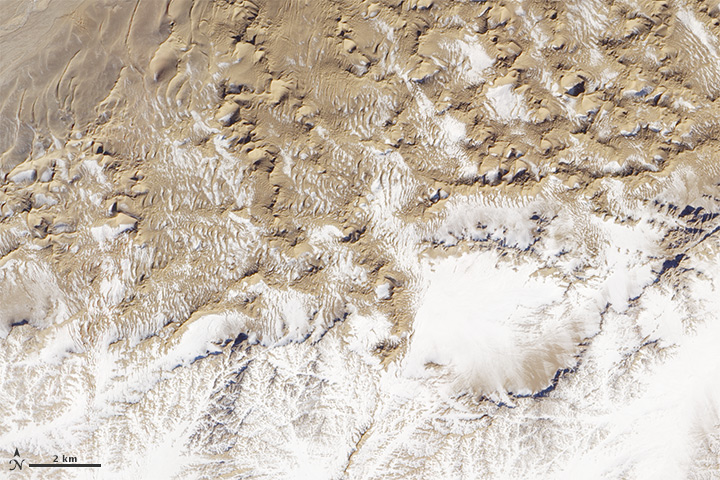 In northwestern China, near the ancient Silk Road outpost of Dunhuang, the sandy landscape sees little moisture but is no stranger to cold. When the cold combines with rare precipitation, the sand dunes of this desert are graced with snow. The Advanced Land Imager (ALI) on NASA’s Earth Observing-1 (EO-1) satellite acquired these natural-color images of an area south of Dunhuang. The ground was snow free on November 27, 2012 (top), but a snowstorm moved through the region by December 7, 2012.

The snow did not uniformly blanket the terrain, but instead alternated with bare ground. Richard Armstrong, a research scientist at the National Snow and Ice Data Center, explains: “Regardless of the makeup of the terrain, if the terrain is complex the snow cover will often be unevenly distributed over that landscape. During and for some time after snowfall, the wind redistributes the snow from windward to leeward slopes. After the storm is over, there is typically uneven melt on adjacent slopes with south-facing slopes melting more, even to bare ground, than north-facing slopes.”

Precipitation is especially rare from December through March—an average of just 1 millimeter (0.04 inches) per month. Average daytime highs in December are -2 degrees Celsius (28 degrees Fahrenheit), and average nighttime lows are -13 degrees Celsius (9 degrees Fahrenheit). “Dunhuang is a very dry place, but cold in winter,” Armstrong observes, “so if and when there is any precipitation, it is bound to be snow.”

Due to the angle of sunlight, these images may produce an optical illusion known as relief inversion.

Precipitation is rare but cold is common in northwestern China. When precipitation falls, it comes as snow upon the dunes.