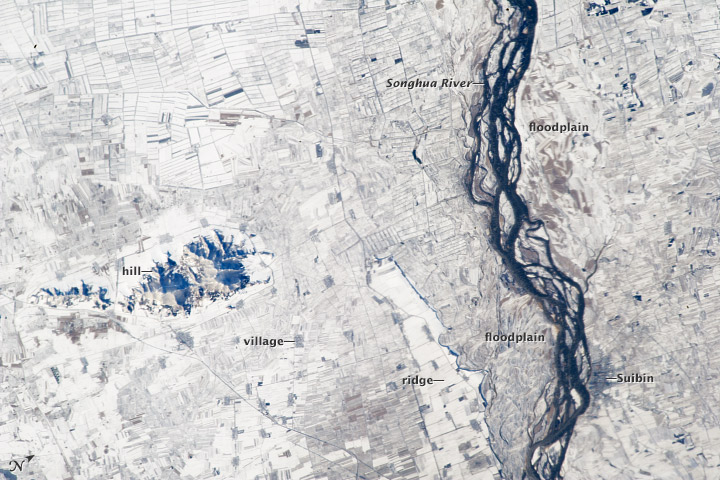 This astronaut photograph highlights hundreds of rectangular fields on either side of a 36-kilometer (22-mile) stretch of the Songhua River. Some fields are easier to see than others due to the winter snow cover. The braided Songhua joins with the Amur River about 40 kilometers (25 miles) downstream, at the border with Russia. Numerous villages also appear as small gray polygons. Broad floodplains can be recognized on both sides of the river, occupied by fewer fields and almost no villages.

The town of Suibing stands out as a larger gray patch on the banks of the river. A significant 300 meter-high hill south of the river throws midmorning shadows. The region is one of the most heavily cultivated in northeastern China, with corn, soybeans, and sorghum being major crops. The areas of varying whiteness cover may correlate with zones of different crops and forest cover (for example, on the hill in the center part of the image). The degree to which fallow fields are cleared of vegetation may also affect the apparent snow brightness.

Astronaut photograph ISS033-E-22759 was acquired on November 18, 2012, with a Nikon D3S digital camera using a 400 millimeter lens, and is provided by the ISS Crew Earth Observations experiment and Image Science & Analysis Laboratory, Johnson Space Center. The image was taken by the Expedition 33 crew. It has been cropped and enhanced to improve contrast, and lens artifacts have been removed. The International Space Station Program supports the laboratory as part of the ISS National Lab to help astronauts take pictures of Earth that will be of the greatest value to scientists and the public, and to make those images freely available on the Internet. Additional images taken by astronauts and cosmonauts can be viewed at the NASA/JSC Gateway to Astronaut Photography of Earth. Caption by M. Justin Wilkinson, Jacobs/ESCG at NASA-JSC.

This astronaut photograph highlights hundreds of rectangular fields along the Songhua River in eastern China. 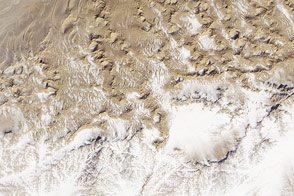