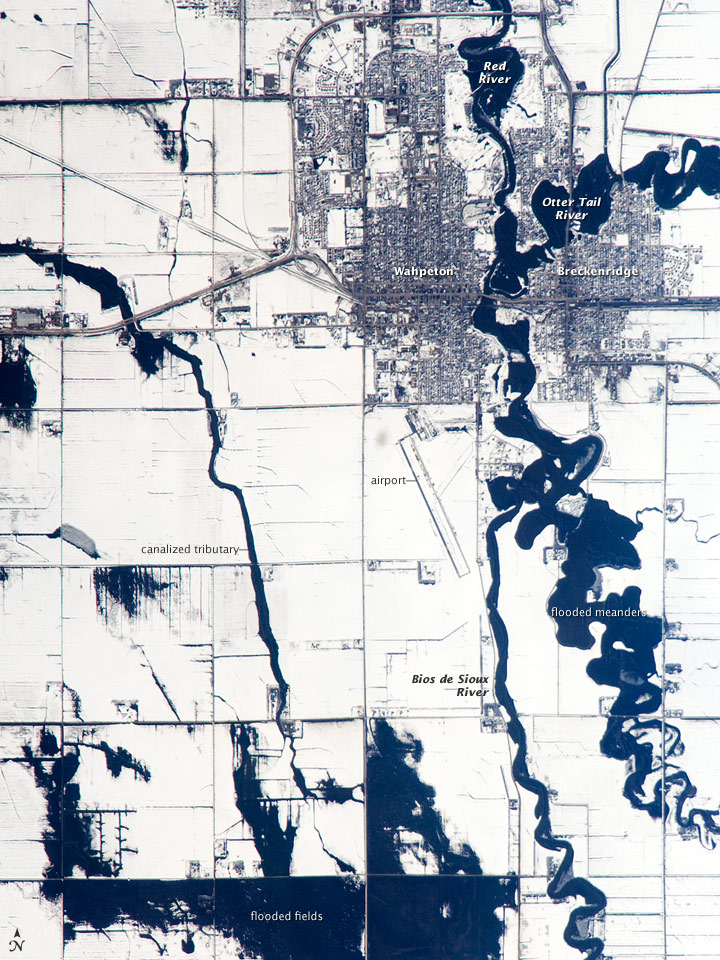 When this astronaut photo was captured on April 9, 2009, the Red River was experiencing its second round of spring flooding. (Two weeks earlier, the river had crested at very high levels.) The Red River flows north between North Dakota and Minnesota from the confluence of the Bois de Sioux River (south, image lower right) and the less well drained, meandering Otter Tail River (east, image right). Floodwaters in these two tributaries appear as black shapes against a snowy agricultural landscape that is defined by rectangular fields. The largest flooded areas are low parts of fields (image bottom) along a canalized western tributary of the Wild Rice River, which itself becomes a tributary of the Red River just south of Fargo, North Dakota.

Wahpeton, North Dakota, and Breckenridge, Minnesota, sit opposite each another on the banks of the Red River, and their city-block patterns stand out as dark gray patches against the snow at image top right. The main runway of the Henry Stern Airport lies angled northwest directly south of Wahpeton, and its 1.3-kilometers (0.8-mile) runway gives a sense of scale to the photo. Access roads to the agricultural fields tend to follow an orthogonal pattern, while larger roads leading to the cities cut across this pattern (image upper left, near Wahpeton). A subtle pattern of drainage ditches and plow lines appears as thin, parallel lines throughout fields in the scene.

Astronaut photograph ISS019-E-5989 was acquired on April 9, 2009, with a Nikon 2DXs digital camera fitted with an 800 mm lens, and it is provided by the ISS Crew Earth Observations experiment and Image Science & Analysis Laboratory, Johnson Space Center. The image was taken by the Expedition 19 crew. The image in this article has been cropped and enhanced to improve contrast. Lens artifacts have been removed. The International Space Station Program supports the laboratory to help astronauts take pictures of Earth that will be of the greatest value to scientists and the public, and to make those images freely available on the Internet. Additional images taken by astronauts and cosmonauts can be viewed at the NASA/JSC Gateway to Astronaut Photography of Earth. Caption by M. Justin Wilkinson, NASA-JSC.