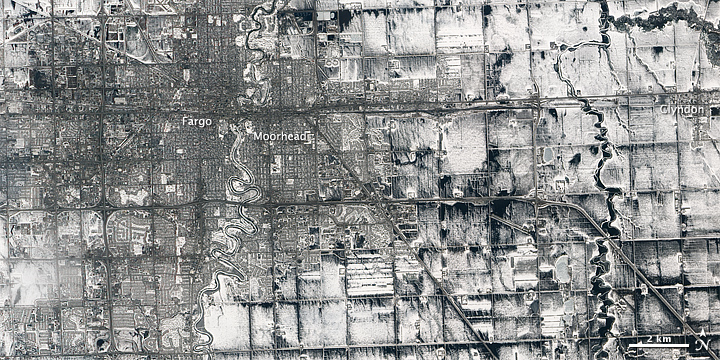 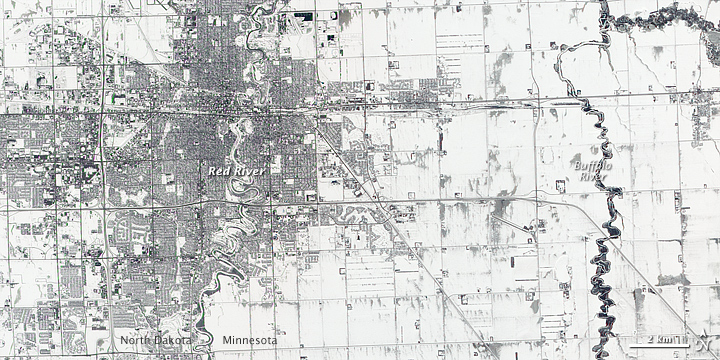 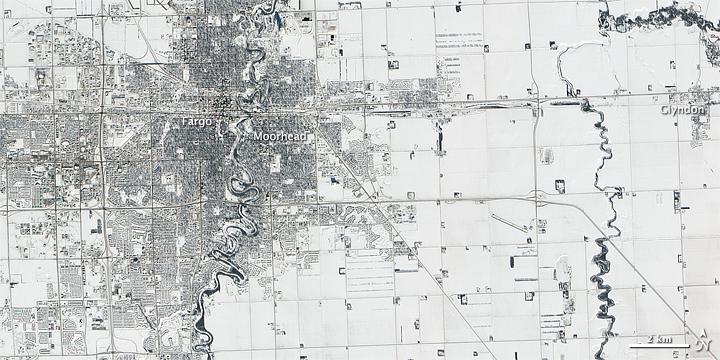 In February 2011, the National Oceanic and Atmospheric Administration warned citizens of the Midwestern United States to prepare for a difficult spring with major floods. Those predictions are being fulfilled in North Dakota (N.D.) and Minnesota (Minn.), as melting snow and spring rains have raised rivers to and above their banks.

The Advanced Land Imager (ALI) on NASA’s Earth Observing-1 (EO-1) satellite acquired these three natural-color views of snow cover and melting in the area around Fargo, N.D., and Moorhead, Minn. The top image was captured on April 2, 2011, a few days before the river approached major flood stage. The middle image shows some spring melting by March 26, 2011, and the bottom image shows a snowy blanket over the landscape on December 12, 2010.

The Red River of the North forms the border between Minnesota and North Dakota, flowing into Canada and eventually Lake Winnipeg. The river runs north, and because the spring thaw tends to expand northward in sync with the flow of meltwaters from the south, river flow tends to accumulate as it moves north. Sometimes the spring flows also run into ice dams in areas that have not yet thawed. The geology of the area also contributes to the tendency to flood.

The Forum of Fargo-Moorhead reported that the river was expected to crest between 39 to 40 feet sometime on April 10. The record flood for the Fargo-Moorhead area was 40.84 feet (12.45 meters) in 2009. Weather forecasts were calling for as much as 1.5 inches of new rain or snow over the weekend, though that was expected take a few days to affect the river.

Citizens and local government groups spent much of the week deploying sandbags and preparing for flood waters. U.S. President Obama declared a federal emergency in the area on April 7, allowing the Federal Emergency Management Agency and other government institutions to provide disaster aid.