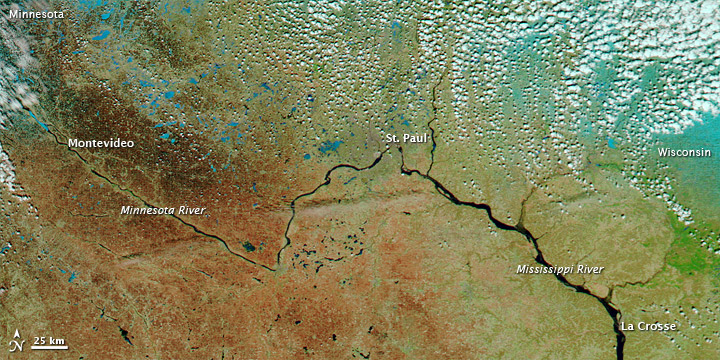 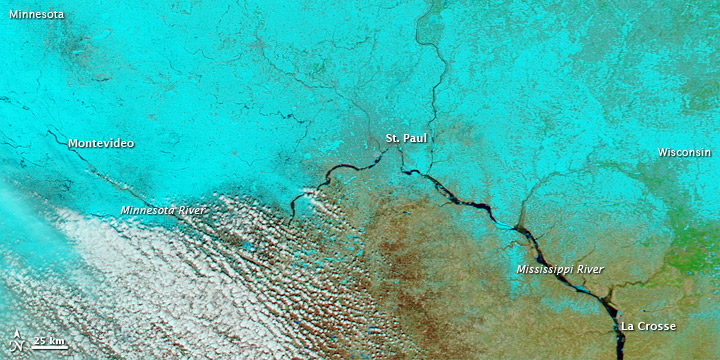 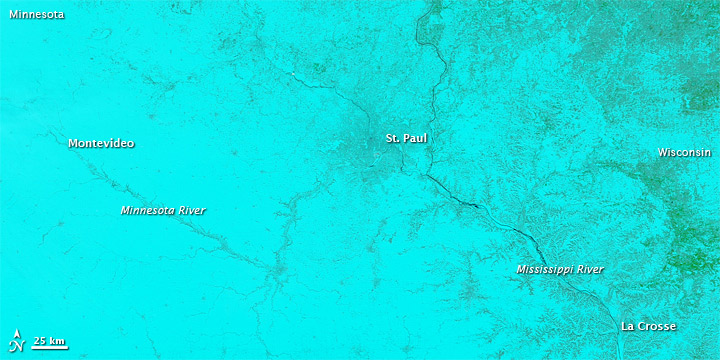 As snow and ice continued to melt in Upper Midwest, waters rose on the Minnesota and Mississippi Rivers, prompting flood alerts for cities perched along those waterways. On April 6, 2011, the Advanced Hydrological Prediction Service (AHPS) of the U.S. National Weather Service issued flood warnings for numerous communities in Minnesota. The AHPS reported major flooding along the Minnesota River at Montevideo, and along the Mississippi River at St. Paul. The AHPS also reported moderate and minor flooding in many other locations in the region.

The Moderate Resolution Imaging Spectroradiometer (MODIS) on NASA’s Aqua satellite acquired these images on April 6, 2011 (top), March 28, 2011 (middle), and February 28, 2011 (bottom). All three images use a combination of infrared and visible light to increase the contrast between water and land. Snow is bright turquoise. Water is navy. Iced-over lakes (visible north of the Minnesota River in early April) are bright blue. Vegetation is green. Soil is earth-toned. Clouds are nearly white and cast shadows.

Snow and ice blanket almost the entire region on February 28. Rivers, hills, and cities interrupt the otherwise uniform sea of blue-green, and some vegetation peeks through the snow in Wisconsin. By March 28, snow has mostly retreated to the north side of the Minnesota and Mississippi Rivers, both of which are much more prominent than they were a month earlier. By April 6, snow and ice have nearly left the scene. Some ice lingers on lakes in the northwest, and a stretch of ice remains on the Minnesota River northwest of Montevideo. Since late March, however, higher water is apparent along the Mississippi River. The river appears swollen near St. Paul, and is higher near La Crosse.

The Minnesota State Emergency Operations Center reported that anticipated springtime flooding was being monitored across most of the state, with the center fully activated in late March. On April 6, the Minnesota governor declared a state of emergency for more than 40 counties affected by floods, according to news reports.

Rising Waters on the Minnesota and Mississippi Rivers

Acquired March 27, 2011, and February 28, 2011, these false-color images show rising waters on the Minnesota and Mississippi Rivers.

Rising Waters on the James River