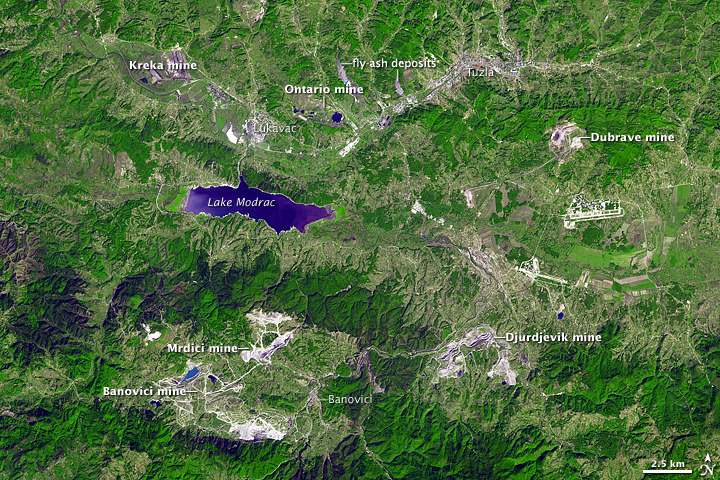 The Tuzla Basin in northeastern Bosnia and Herzegovina has been an industrial mainstay in Eastern Europe since the late 1800s. The area is among the largest suppliers of lignite (brown coal) and sub-bituminous coal to several power plants in the region, including Bosnia’s largest (715 MW) steam-electric plant, which is located in the city of Tuzla, and the nearby coke-production plant in the town of Lukavac.

The area’s heavy dependence on coal for industrial and domestic electricity and heating has left its mark on the surrounding landscape. This approximately natural-color image of the area from the Advanced Spaceborne Thermal Emission And Reflection Radiometer (ASTER) on NASA’s Terra satellite from September 21, 2003, shows large-scale surface mines (also called “open pit,” or “strip mines”) in the Kreka-Banovici-Djurdjevik region. Vegetation is green (brighter than it would naturally appear), bare or urbanized land is light purple to gray, and water is purplish-blue.

Several large mines and their associated debris (tailings) are scattered across the image. Four large open pit mines appear in a clockwise arrangement starting southeast of Tuzla: Dubrave, Djurdjevik, Mrdici, and Banovici, all of which produce brown coal. At the upper left corner of the image is the Kreka strip mine, which produces lignite. East of the inactive Ontario Strip Mine, lavender-colored patches are fly-ash deposits—the residue left over from coal burning at the Tuzla power plant.

The transition from underground mines to more profitable large-scale surface mines has led to soil degradation, dramatic changes to terrain, and water and air pollution. Scientists at the University of Tuzla have estimated that open pit mining has degraded at least 20,000 hectares (about 50,000 acres) of land in the country, with the majority of the damage occurring in the Tuzla Basin. Remediating some of the worst pollution hotspots in the Tuzla Basin is part of a new agreement among cities and local industry to make industrial activities in the area more environmentally sustainable.

Surface mines and fly-ash deposits in the Tuzla Basin reveal the region’ long history as a coal-production hub for Bosnia and Herzegovina. This image of the altered landscape was captured on September 21, 2003. 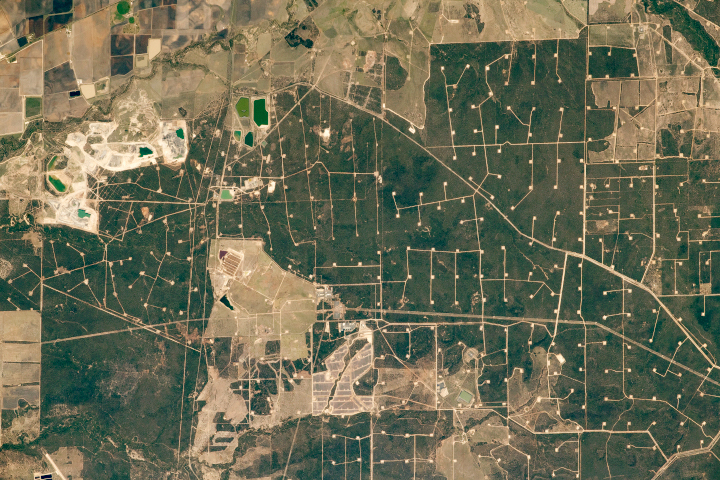 Coal and Cattle in Southern Queensland

The Surat Basin has 150 million-year-old sediments, four billion tons of proven thermal coal resources, and a bunch of cows.