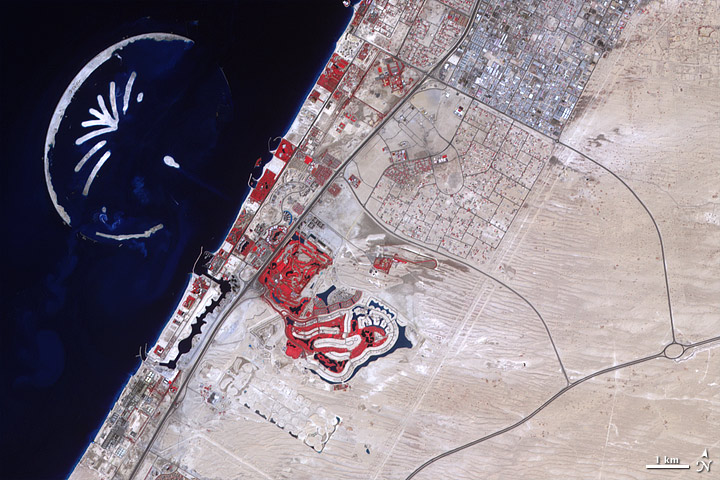 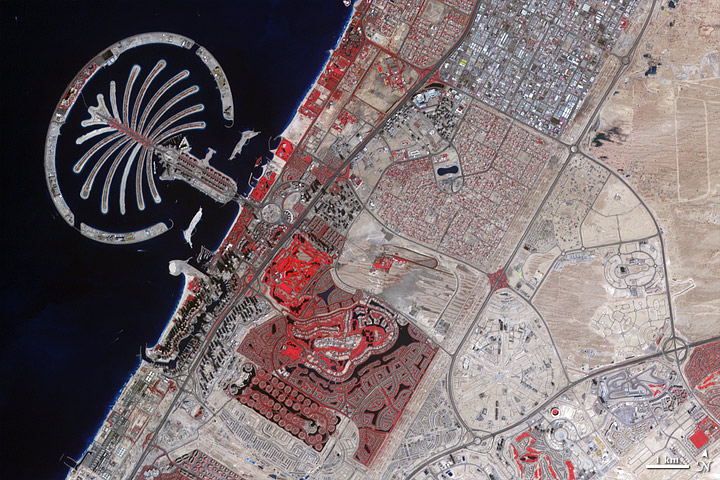 April 29, 2009, marks the Earth Observatory’s tenth anniversary. In the past decade, NASA satellites have observed myriad changes in our planet, both natural and human-made. Some changes have been cyclical, others irreversible. Some human-made changes have been intentional, others accidental. Through it all, NASA satellites have observed and recorded the changes, and the Earth Observatory has shared thousands of those observations with our visitors.

To celebrate our anniversary, we have added a new series of image collections, “World of Change,” that is devoted to change—both global and local—over time. The images shown here are two of the ten images in our first collection, featuring urbanization and coastal development in Dubai. Part of the United Arab Emirates, Dubai shows some of the most conspicuous examples of engineered coastline in the world: Palm Jumeirah, also known as “The Palm.” Between 2000 and 2009, the Advanced Spaceborne Thermal Emission and Reflection Radiometer (ASTER) on NASA’s Terra satellite observed the progress of this artificial archipelago.

In these false-color images, bare ground appears light brown, vegetation appears red, water appears dark blue, and buildings and paved surfaces appear light blue or gray. The United Arab Emirates falls within the Empty Quarter—the world’s largest sand sea, which stretches across the southern end of the Arabian Peninsula. As a result, little native vegetation thrives in this region, and most of the natural land surface is beige or tan. The bright red vegetated areas are almost certainly irrigated land.

The top image, acquired in October 2002, shows the early stages of Palm Jumeirah. The circular outline of the archipelago is largely completed, and the palm fronds are beginning to take shape. Inland, cityscape begins to push eastward into the desert, with a combination of roads and buildings. The conspicuously vegetated area southeast of Palm Jumeirah is a golf course. East of this course, however, the land is mostly undeveloped desert.

The bottom image shows the same region in the same season, but several years later, in November 2008. In this image, Palm Jumeirah sports 17 sandy fronds. Red areas on the artificial archipelago show that some vegetation has been added, and buildings populate Palm Jumeirah’s trunk. Inland, the changes are just as dramatic. Near the shore, skyscrapers line roadways, casting their shadows toward the northwest. Developed area around the golf course has expanded, and water-enclosed artificial islands, known as Jumeirah Islands, line the course’s southern perimeter. Pushing well eastward of the golf course, cityscape fills the scene, with buildings linked by curving roadways. Despite the expanded urban area, however, earth tones still predominate, evidence of the area’s continued arid environment.

According to its Netherlands-based builder, the construction of Palm Jumeirah used 110 million cubic meters of sand enclosed by an 11-kilometer (roughly 7-mile) rocky breakwater. The construction process entailed dredging sand from the seafloor of the Persian Gulf and building the islands initially to a depth of about 5 meters (16 feet) below sea level prior to completing the breakwater. Once the breakwater was completed, sand was added to the islands to raise them above sea level.

NASA images by Robert Simmon, based on data from the NASA/GSFC/METI/ERSDAC/JAROS, and U.S./Japan ASTER Science Team. Caption by Michon Scott.

This development of Palm Jumeirah is one of the world’s most conspicuous examples of engineered coastlines.