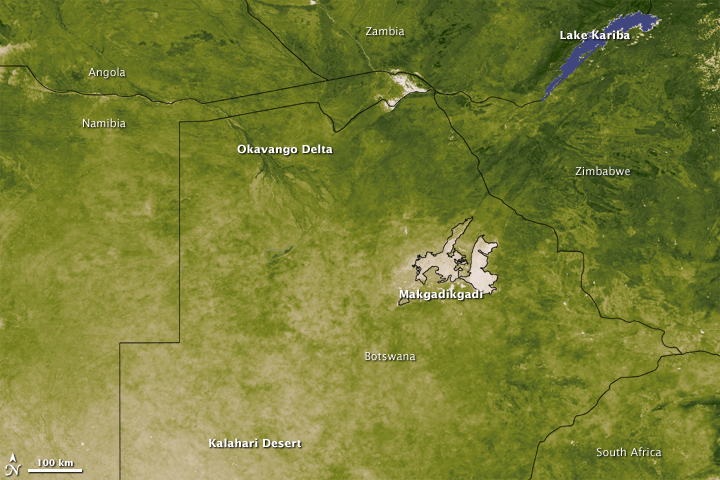 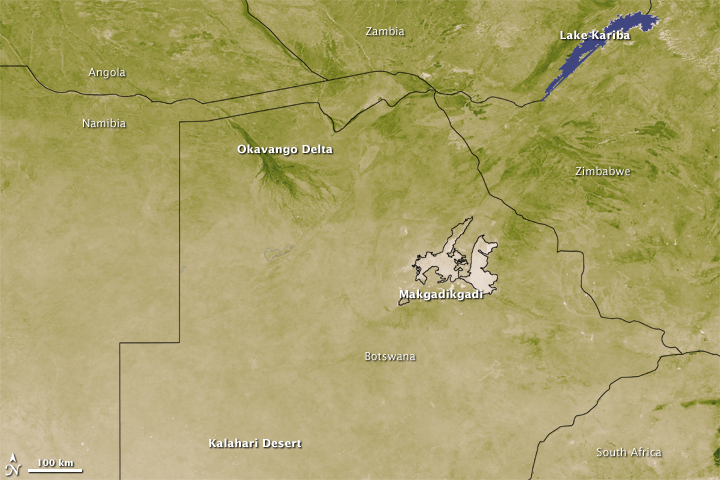 The Kalahari Desert rests inside the larger Kalahari Basin in sub-Saharan Africa. The Kalahari covers most of Botswana, and parts of Namibia, Angola, Zambia, and South Africa. August is the height of the dry season, when scorching sunlight paired with little or no rain parches the vegetation, and winds stir dust storms. But the Kalahari Basin possesses an oasis that flourishes in the midst of the local dry season: the Okavango Delta.

MODIS captured the top image on April 19, 2009, not long after the end of the rainy season. In this image, green hues predominate throughout the region. MODIS captured the bottom image on August 6, 2008, during the dry season. Most of this image appears pale green or beige—an indication of the reduced plant activity during the dry season. Plants seem especially listless in the south, part of the Kalahari Desert.

When temperatures soar, vegetation withers, and familiar drinking holes dry up, many animals must move elsewhere to find adequate food and water. This is especially true of Kalahari elephants. Capable of consuming 200 liters (52 gallons) of water, and 140 kilograms (300 pounds) of vegetation in a single day, Kalahari elephants often migrate during the dry season, when the parched local landscape can no longer support their needs. What saves these animals is an oasis.

The Okavango Delta—the deep green branching feature in northern Botswana—is just such an oasis. During the dry season, this inland delta becomes a crucial source of drinking water for the region’s wildlife. The Okavango Delta actually flourishes more during the local dry season than it does during or shortly after the summer wet season. The delta is fed by headwaters in the Angolan Highlands, far to the delta’s northwest. The waters travel meandering waterways with extremely shallow gradients. As a result, floodwaters from the Angolan wet season take several months to reach the delta, and it becomes a watery respite from the surrounding desert just when wildlife most needs something to drink. Matriarch elephants can remember the location of this delta and lead herds there even after years without visiting it.