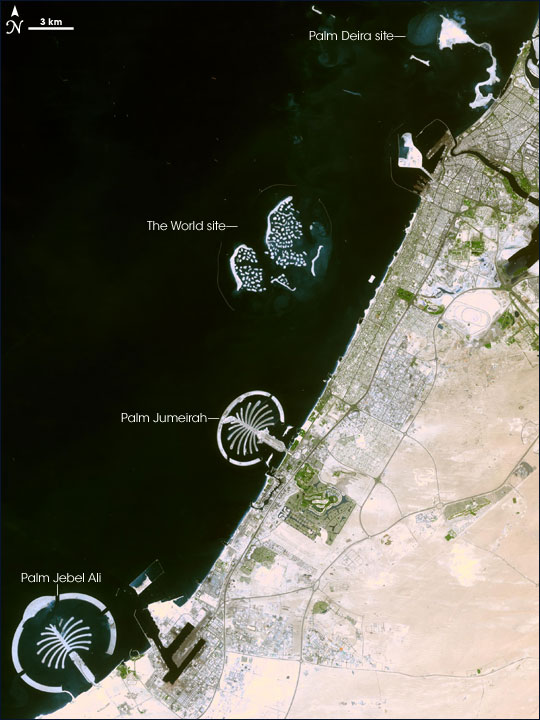 Along the coast of Dubai—one of several emirates comprising the United Arab Emirates—are human-made islands. When the Advanced Spaceborne Thermal Emission and Reflection Radiometer (ASTER) on NASA’s Terra satellite took this picture on September 18, 2006, these islands were the largest artificial islands in the world. All of the islands were still under some degree of construction in the fall of 2006.

From south to north, the artificial island sites in this image are Palm Jebel Ali, Palm Jumeirah, The World, and Palm Deira. Palm Jebel Ali and Palm Jumeirah appear largely complete in this image, looking like giant palm trees enclosed in huge arcs. Palm Deira, intended to be an even bigger palm tree when complete, is in the earliest stages of construction. In between Palm Jumeirah and the site for Palm Deira is the site for The World, which, when complete, will resemble a world map. The sand comprising all these artificial islands makes them stand out against the black water. Areas of shallower water, such as those around the site for The World, appear in dark blue-green. Sporting sand the same color as the human-made islands, Dubai itself is largely arid. Along the coast, straight lines and sharp angles indicate buildings and city streets, connected by smoothly curving highways. Well-irrigated urban areas appear in deep green.

The construction process for the Palm Islands involves dredging sand from the bottom of the Persian Gulf and then spraying that sand over the appropriate areas to create the desired shapes. Satellite technology has played a role in the construction of these islands, as the sand-spraying ships rely on Global Positioning System (GPS) satellite readings to locate their targets. Due to extensive experience with land reclamation in their own country, Dutch scientists also assisted with some of the island construction.