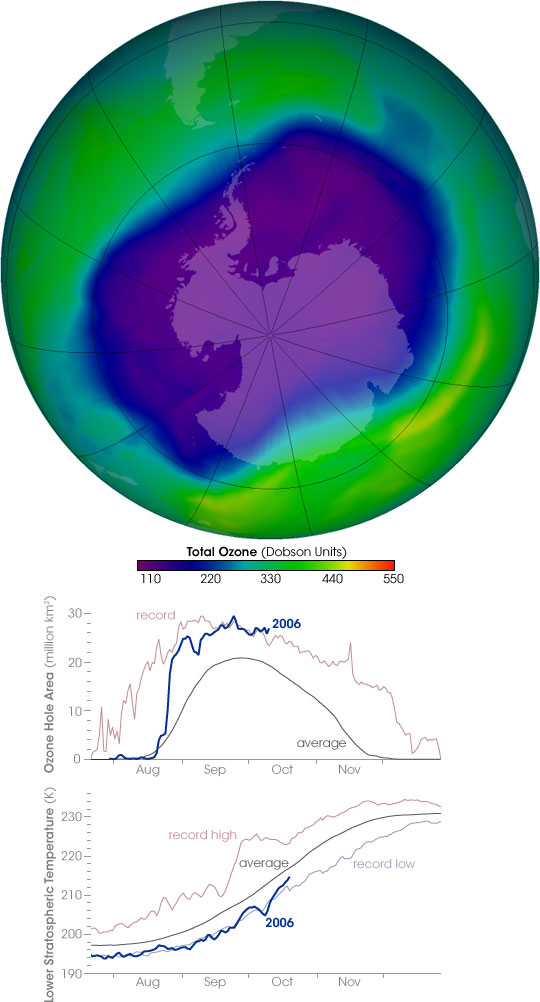 “From September 21 to 30, [2006], the average area of the ozone hole was the largest ever observed, at 10.6 million square miles,” said Paul Newman, atmospheric scientist at NASA’s Goddard Space Flight Center. Newman was joined by other scientists from NASA and the National Oceanic and Atmospheric Administration (NOAA) in reporting that the ozone hole over the polar region of the Southern Hemisphere broke records for both area and depth in 2006. A little over a week after the ozone hole sustained its new record high for average area, satellites and balloon-based instruments recorded the lowest concentrations of ozone ever observed over Antarctica, making the ozone hole the deepest it had ever been.

This image, made from data collected by the Ozone Monitoring Instrument on NASA’s Aura satellite, shows the Antarctic ozone hole on September 24, 2006. The blues and purples that cover most of Antarctica illustrate where ozone levels were low, while greens, yellows, and red point to higher ozone levels. On September 24, the ozone hole covered an area of 11.4 million square miles, matching the single-day record area previously observed on September 9, 2000.

The new record set in 2006, by contrast, was for the largest average area over an 11-day period, indicating that the hole stayed larger for longer than it ever has before. This concept is demonstrated by the line graph immediately below the image. The blue line charts out the area of the ozone hole during 2006. In the background, the smooth grey curve illustrates the multi-year average area during the austral spring, when the ozone hole is largest. The red line shows the record areas—the largest area observed on any single day—during the same multi-year period. Instead of spiking and then dropping as might be expected, the area in 2006 ghosts the multi-year record, staying unusually large over a relatively long period.

The last line graph illustrates why the ozone hole was unusually large and long-lived in 2006. While human-produced compounds break down the ozone hole by releasing chlorine and bromine gases into the atmosphere, the temperature of the Antarctic stratosphere causes the severity of the ozone hole to vary from year to year. Colder-than-average temperatures result in larger and deeper ozone holes, while warmer temperatures lead to smaller ones. In 2006, as the graph shows, temperatures plunged well below average, hovering near or dipping below record-lows. These unusually cold temperatures increased the size of the ozone hole by 1.2 to 1.5 million square miles, according to an analysis completed by the NOAA National Centers for Environmental Prediction (NCEP). If the stratospheric weather conditions had been normal, the ozone hole would be expected to reach a size of about 8.9 to 9.3 million square miles, about the surface area of North America.

The second record set in 2006—for the deepest ozone hole ever observed—is less obvious in the top image, but is hinted at by the prevalence of purple, the color used for the lowest concentrations. The Ozone Monitoring Instrument (OMI) measures the total amount of ozone from the ground to the upper atmosphere over the entire Antarctic continent. The measurements are shown in Dobson Units. One Dobson Unit is the amount of ozone it would take to create a layer of pure ozone 0.01 millimeters thick at 0 degrees Celsius at the surface of the Earth. Any location where the concentration drops below 220 Dobson Units is part of the ozone hole. On October 8, 2006, OMI observed a low value of 85 Dobson Units (DU) in a region over the East Antarctic ice sheet. These measurements were similar to levels recorded by balloon-borne instruments over the South Pole. The balloons also found that nearly all of the ozone in the layer between eight and thirteen miles above the Earth’s surface had been destroyed. In this critical layer, the instrument measured a record low of only 1.2 DU.

“These numbers mean the ozone is virtually gone in this layer of the atmosphere,” said David Hofmann, director of the Global Monitoring Division at the NOAA Earth System Research Laboratory. “The depleted layer has an unusual vertical extent this year, so it appears that the 2006 ozone hole will go down as a record-setter.”

The ozone layer protects life on Earth by blocking harmful ultraviolet rays from the sun. The “ozone hole” is a severe depletion of the ozone layer high above Antarctica, so these regions may have received more ultraviolet light than usual. The 1987 Montreal Protocol banned ozone-depleting chemicals, but the long lifetime of those chemicals means that the ozone layer will not recover for several decades.